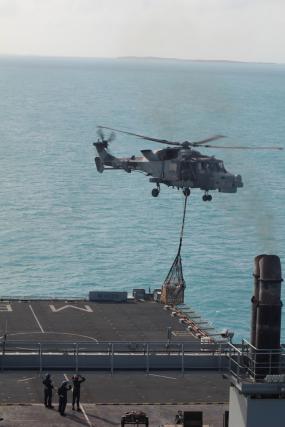 Members of the humanitarian and disaster relief crew of RFA Mounts Bay and the RN helicopter will be paying a brief flying visit to the Virgin Islands today, Monday May 27.

The visit forms part of hurricane preparedness planning ahead of the 2019 hurricane season which starts on Friday.

Crew members will meet with key personnel in the Virgin Islands, including the Department for Disaster Management, Royal Virgin Islands Police Force, Virgin Islands Fire and Rescue Service and BVI Health Services Authority to understand how the RFA could support the Territory in responding to any major disaster should the need arise.   The  RN Wildcat helicopter will also undertake a fly over of Tortola and the Sister Islands, to familiarise themselves with the wide expanse of the Virgin Islands’ many islands and cays.

RFA Mounts Bay has been deployed to the area since 2017, when she provided support to the UK Overseas Territories and Dominica post Hurricanes Irma and Maria.

The UK maintains a year-round naval presence in the Caribbean. RFA Mounts Bay is currently embarking upon her 2019 Hurricane season patrol, supported by the Royal Navy (RN) Wildcat helicopter and crew from 815 Naval Air Squadron and 24 Commando Royal Engineers.

RFA Mounts Bay’s primary task is to provide enhanced security and reassurance to the UK Overseas Territories and their citizens, including disaster relief when called upon; she will also be involved in counter-narcotic operations, later in the year, working with partners in the region whilst remaining at very short notice to react to any emerging crises around the Caribbean.

RFA Mounts Bay’s operational cargo, including tractors, diggers, trucks, quad bikes, command and all-terrain vehicles and disaster relief stores, together with her ability to operate boats from her dock makes her an excellent disaster relief platform. However, it is the skills of the crew and embarked personnel that make the real difference to assist an island’s emergency services during a crisis.

Office of the Governor
Department of Disaster Management