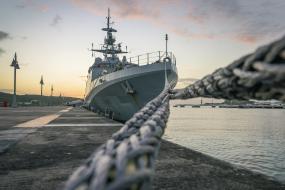 The Royal Navy patrol ship, HMS Medway will visit Tortola from October 22 as part of the United Kingdom’s Caribbean Task Group’s mission to prepare for and respond to disasters in the region.

While in port, the  crew will provide a capability demonstration and meet with officials from the Department of Disaster Management and other key agencies to determine how they can best work together and support the Territory in the wake of a hurricane or other natural disaster.

The Task Group also consists of the support ship Royal Fleet Auxiliary (RFA) Wave Knight and its Wildcat HMA2 helicopter, along with the Crisis Response Troop drawn from 24 Commando Royal Engineers. The group carries specialist equipment and emergency supplies for use in the immediate aftermath of a disaster.

His Excellency the Governor, Mr. John Rankin, CMG, said, “The team aboard HMS Medway are visiting the VI to meet key partners and to ensure that they can respond in the most effective way to meet the Territory’s greatest needs following a disaster.”

Governor Rankin added, “The safety and security of the people of the Virgin Islands is my top priority and I am pleased that we are able to have this exercise. Some of the Task Group’s capabilities will be on show during the visit. More details will be released in the coming days.”

The Task Group works with the six UK Overseas Territories in the region and with other regional partners, to prepare for and respond to national disasters. This includes planning and training to develop capacity and disaster relief capabilities during the peak hurricane season.

Commander of the Task Group, Brian Trim said, “We are really looking forward to our visit. While we have worked in partnership with Montserrat and the Turks and Caicos Islands over the last few months, this will be our first chance this year to work with the VI. As the people of the VI know very well, working together is the key to success after a hurricane. I am sure we can learn a great deal through our cooperation during this visit.”

HMS Medway is a River Class Offshore Patrol Vessel launched in 2017. It is permanently deployed to the Caribbean to support disaster relief and conduct counter-trafficking operations. Its flight deck can operate medium sized helicopters or embark up to eight shipping containers