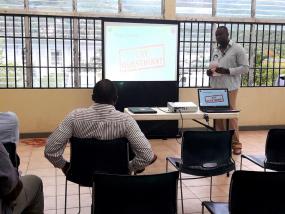 Land owners with property along the Nibbs Ghut in Sea Cows Bay have been holding discussions on the installation of sedimentation traps along the ghut to reduce the extent of the flooding that affects the community.

The meeting was held at the Valerie O. Thomas Community Centre on July 30 and allowed for land owners, Government representatives and the District Representative, Honourable Julian Fraser, to discuss the details and timelines for the project and to agree on the proposed location for the traps with officials from the Department of Disaster Management (DDM) and the Public Works Department.

The initiative is part of the Establishing Flood-Resilient SMART Communities through Non-Governmental Organisations (NGO) Partnerships Project that is being implemented by the DDM and financed through a grant from the Caribbean Development Bank (CDB).

Mr. Hodge added, “We looked at three options for the basin and agreed that an unlined basin approach would be most desirable as it met all the technical and financial requirements of the project, but it will require dedicated maintenance and cooperation from community members.”

The installation of sedimentation traps is expected to help to alleviate the problem of silt flowing into the bay. The objective is to reduce sediment reaching the sensitive marine ecosystem and to mitigate flooding of the community. The traps are one of several flood and silt reduction measures needed to reduce flooding in this community.

The Sea Cows Bay community has been identified as a pilot community in the SMART Communities project and will see additional initiatives that will help to address flooding in that area. There are additional plans to address drainage around the Valerie O. Thomas Community Centre and to complete works on the Ebenezer Thomas Primary School. Several other activities have been completed in this community since the start of the project including the installation of a new emergency siren, hosting of Community Engagement Meetings, conducting of a Community Engagement Survey and Community Clean-up Campaigns.

The Establishing Flood-Resilient SMART Communities through Non-Governmental Organisations (NGO) Partnerships Project targets the communities of Sea Cow’s Bay and East End/Long Look on Tortola, and Great Harbour on the sister island of Jost Van Dyke.  A number of Non-Governmental Organisations are partnering with the DDM to implement the project including the BVI Red Cross, the Rotary Family of the BVI, The Adventist Development Relief Agency, Lions Club of Tortola and the Jost Van Dyke Preservation Society.

The project is being funded through the Community Disaster Risk Reduction Fund (CDRRF), which is managed by the Caribbean Development Bank. It is a collaborative effort among the Government of the British Virgin Islands through the Department of Disaster Management (DDM), and several non-profit organisations to the sum of $649,500.

The fund established by CDB is supported by the Government of Canada and the European Union and finances community-based disaster risk reduction and climate change adaptation initiatives at the local level, across eligible borrowing member countries of the CDB.

The BVI project was initially expected to conclude by June 1, but was granted an extension to December 2019 to allow for these final works to be completed. The tender process for the remaining works in Sea Cows Bay is now in its final stages and all works are expected to commence in the coming weeks.

More than a dozen landowners and NGO representatives attended the meeting to discuss drainage solutions in Sea Cows Bay, July 30.