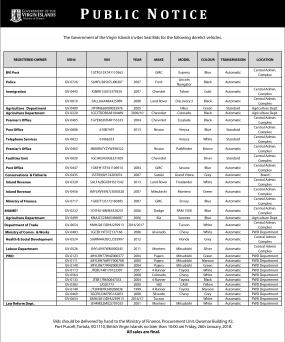 The Government of the Virgin Islands is inviting sealed bids for a number of derelict or old Government vehicles.

The list of vehicles available can be found on the Government’s website at bvi.gov.vg. Inspection can be done on any working day between 8:30 a.m. to 4:30 p.m.

Persons who are interested in purchasing any of the vehicles are invited to address and deliver quotations to the Procurement Coordinator, Ministry of Finance, Qwomar Building #2, Port Purcell, Tortola, British Virgin Islands in a sealed envelope no later than 10:00 a.m. Friday, January 28.

The bid should include the registration number, make/model, serial number and year of the vehicle, and in bold capital letters “Quotation for Derelict Vehicle”.

Bids must be signed and full name, address and valid telephone numbers must be provided.  The person/s who offers the highest bid will be awarded the vehicle.  Late bids are not permitted.

Payments should be paid to the Accountant General seven working days after an award letter has been received.   The letter must be presented when payment is being made. If the highest bidder fails to honour the bid, the bid will be cancelled and forfeited. The opportunity will then be given to the next highest bidder to complete the bid provided.

The release of the sold vehicle will be arranged only after the successful bidder submits documented evidence in support of sale (i.e. award letter and receipt from Accountant General.)

The sold vehicle must be removed by the successful bidder(s) within 24 hours of sale at their own expense. No assistance/transportation will be provided by the Government of the Virgin Islands. Unsuccessful bidders shall be notified.