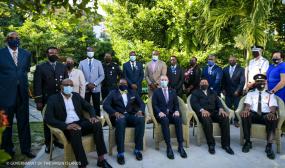 Ten security and protection officers received His Excellency the Governor’s Medal for Meritorious Service at a recognition ceremony at the Old Government House Museum on Friday, January 22, 2021.

Then-Governor Augustus J.U. Jaspert said he was proud to have initiated the award for those security and protection officers that help the Virgin Islands maintain its status as a safe and enjoyable place to live.  Mr. Jaspert added that while he is grateful for all the members of security and protection forces who have risen to the challenges presented by 2020, it is important to recognise those who went beyond the call of duty.  “I hope that this award becomes something that inspires officers across our agencies to keep doing their best to keep our public safe,” he said.

Acting Governor David D. Archer, Jr. remarked on his appreciation for Mr. Jaspert’s desire to recognise excellence and bravery in the line of duty; and for the men and women who were honoured.  “I extend my deepest thanks to these ten officers for all the work that they have done and continue to do,” Mr. Archer, Jr. said.

The Acting Governor went on to thank the leaders among the security and protection forces for their commitment to developing and encouraging the careers of promising young officers as well as the more senior officers.

It is intended that the Governor’s Medal for Meritorious Service will continue to be awarded annually.

Recipients of His Excellency the Governor’s Medal for Meritorious Service:

CAPTION: Recipients of His Excellency the Governor’s Medal for Meritorious Service gathered with their nominating officers and other Government officials for a recognition ceremony at Old Government House Museum.