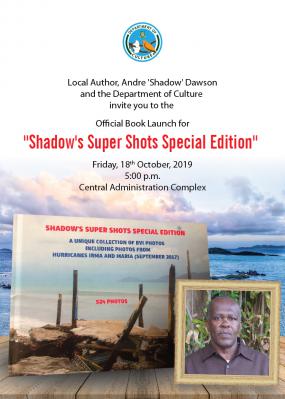 Local Photographer, Andre “Shadow” Dawson has said that his soon to be launched “Shadow’s Super Shots Special Edition” book includes some rare and exclusive shots of various aspects of the Virgin Islands.

“We live here and we seem to take it for granted but as a photographer, over the years I have traveled to the outer islands and I was able to take some rare and exclusive shots,” Mr. Dawson said of his book which is a compilation of 524 photos captured from 2005 to 2018. It also includes before and after photos from Hurricanes Irma and Maria.

The photographer said the book captures every aspect of the Territory’s development, including the achievements of Gold Medalist Kyron McMaster. He added that it is his goal to have the book in every household in the Territory and suggested that it would be fitting as a gift or souvenir for anyone, especially taxi drivers.

“The book is a good way to market the BVI because not only does it cover Tortola but the other islands,” Mr. Dawson explained. He added, “It’s a good way to sell the Territory and BVIslanders who have not been home in a while can see photos of the storm.”

The launch will be done in collaboration with the Department of Culture on Friday, October 18, Central Administration Complex Breezeway at 5:00 p.m.

Since the hurricanes in 2017, several persons have documented their experience or have written fictional stories related to the disasters of Irma and Marie. These books include “Irma Brings Love” by Maureen A. Peters and “Irma Diaries: Compelling Survivor Stories from The Virgin Islands” by Angela Burnett.

The Department of Culture is committed to assisting local authors to publicise their works and is encouraging authors to contact the department at 468-4949.