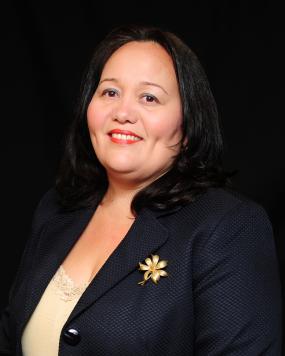 The Director of the Department of Disaster Management, Ms. Sharleen S. DaBreo will be honoured at an investiture ceremony at Government House. She will be awarded with the Member of the Order of the British Empire (MBE) Badge.

The initial announcement of this MBE award was made by His Excellency the Governor, Augustus J. U. Jaspert at the Queen’s Birthday Reception at the Government House on 9th June, 2018.

The MBE is awarded for a significant achievement or outstanding service to the community. A MBE is also awarded for local ‘hands-on’ service which stands out as an example to other people.

Governor Jaspert said, “Ms. DaBreo is well deserving of this honour. She has led the Department of Disaster Management through several outstanding achievements, which are worthy of this recognition. I am thrilled that she is honoured for her dedication and work in this way.”

Ms. Sharleen S. DaBreo is a public officer of the Government of the Virgin Islands who has served in the Territory for the past 24 years.  She has held the post of Director of Disaster Management (DDM) in the Virgin Islands for over 20 years.  Ms. Dabreo continues to carry out exceptional service as well as conduct voluntary service within the wider community.

In 2015, her leadership, dedication, experience and knowledge were instrumental in the Virgin Islands becoming the first Territory outside of the United States and Canada to be granted international accreditation for its disaster management programme.

Ms. DaBreo is to be commended for this remarkable achievement for the DDM and for the work it undertakes to ensure that the BVI becomes an increasingly resilient society.

In 2017, Ms. DaBreo’s many years of experience in the field of Disaster Management were put to the test during the passage of hurricanes Irma and Maria. She ensured that the Territory’s necessary systems were in place and implemented prior to and after the hurricanes. As a result of her preparation, lives were saved and the DDM remained functional at a different location.

Ms. DaBreo, who is a dedicated Public Officer has provided the Virgin Islands with exemplary sterling service.  She is a shining example of what it means to put country above self.

The MBE Badge will be presented to Ms. DaBreo at an Investiture Ceremony at Government House and her name will be published in the Official Gazette.