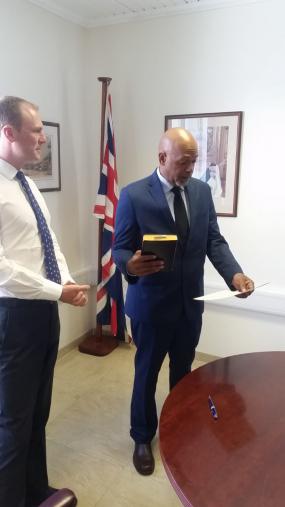 Saint Lucian native Shawn Innocent has been appointed as a full-time Magistrate for a period of six months with effect from September 3rd.

The appointment was made by His Excellency the Governor Augustus J. U. Jaspert in accordance with Section 95 of the Virgin Islands Constitution Order and in consultation with the Judicial and Legal Services Commission.

Acting Permanent Secretary in the Office of the Deputy Governor, Mrs. Carolyn Stoutt Igwe, welcomes Mr. Innocent’s appointment as he substitutes for Magistrate Ayanna Da Breo, who is currently on medical leave.

Mrs. Stoutt Igwe said, “Magistrate Innocent will provide much needed support to Senior Magistrate Tamia Richards in addressing the backlog of cases created as a result of the damages sustained to the Magistrate Court buildings following Hurricane Irma. Along with the additional Magistrates, we are well on our way to ensuring that a sense of normalcy is restored to this aspect of the judicial system.”

Mr. Innocent is a graduate of the University of the West Indies Cave Hill Campus where he attained a Bachelor of Laws (LLB) degree. He also attained a Certificate of Legal Education from the Hugh Wooding Law School in Trinidad and Tobago.

He was called to the Bar of the Eastern Caribbean Supreme Court in 1996 and previously served as Crown Counsel I in the Attorney General’s Chambers and Magistrate for the District Court in St. Lucia. His specialties are in the areas of Criminal Law and Civil Litigation (High Court and Appellate Jurisdiction), Corporate Law and General Legal Practice. He is a member of the Saint Lucia Bar Association and affiliated with the Simons Muirhead & Burton Death Penalty Project in the United Kingdom.

Mr. Innocent will be responsible for trying persons charged with summary offences, conducting preliminary inquiries into indictable offences, trying civil actions founded in contract or tort where the amount claimed does not exceed $10,000, hearing and determining applications made under the Juvenile Act; hearing and determining all complaints laid under the Physical Planning Act;  serving as Coroner, and conducting inquests into unnatural deaths occurring within the Territory; supervising the execution of writs and supervising and managing the judicial operations of the Magistrate's Courts in the Territory.