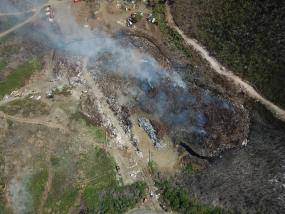 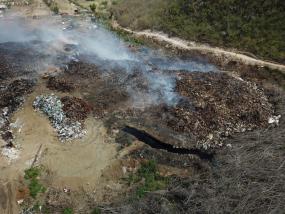 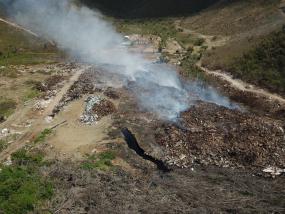 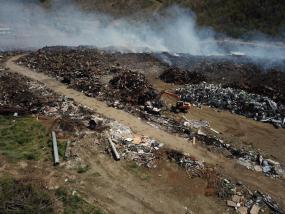 Chief Fire Officer, Mr. Zebalon McLean and the Manager for the Department of Waste Management, Mr. Greg Massicote have confirmed that there is currently no visible surface fire at the Cox Heath debris site and the smoke has decreased considerably.

Mr. McLean said, “Since Monday, May 15, all first responders on site received additional masks and respirators to protect themselves through a donation from the Foreign and Commonwealth Office (FCO). Since then, heavy equipment operators continue to remove debris from the site while fire officers simultaneously cooled the interior of the pile to reduce smoke and the potential for possible internal combustion”.

The Chief Fire Officer has also confirmed that equipment from the US Virgin Islands, scheduled to arrive in the Territory by May 17, will assist in this phase of the operation of extinguishing any fires under the pile and in further reducing the smoke plume.

Meanwhile, Medical Officer and Health Disaster Coordinator in the Ministry of Health and Social Development, Dr. Ronald Georges, in response to concerns raised by residents regarding the effects of the smoke, confirmed that on the weekend of May 12, the Ministry in conjunction with BVI Health Services Authority conducted building to building visits for the communities directly affected by the smoke.

All asthmatic residents or those with any respiratory illnesses, in particular children and the elderly, were advised to take extra precaution to avoid exposure to the smoke.

The BVI Health Services Authority has also confirmed that the Cane Garden Bay clinic was reopened to facilitate care of affected persons from Monday to Friday between the hours 8:30 a.m. to 4:30 p.m. Persons experiencing extreme medical difficulties are aslo advised to visit the Emergency Room at the Peebles Hospital.