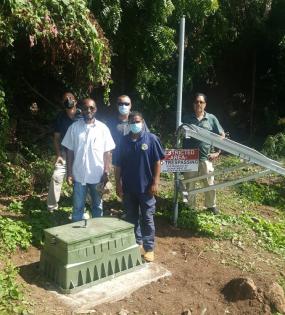 Officers from the Department of Disaster Management (DDM) and engineering partners from the University of Puerto Rico Strong Motion Program in Mayagüez installed the unit to confirm the feasibility of solar powered strong motion monitoring.

The device monitors movements of the soil caused by earthquakes, and provides data that is shared with partners throughout the region.

“The strong motion network is extremely useful, in particular when it comes to designing buildings which are capable of withstanding seismic movement,” Mr. Penn said.

“Now that we know the photovoltaic systems work, we will be ready for the next visit, when we will install four brand new solar stations, including at Norman Island and Guana Island,” Dr. Martinez said.

The partnership between BVI Government and the University of Puerto Rico, Mayagüez has been formalised since the signing of a Memorandum of Understanding in 2005, which covers the areas of seismic monitoring, providing equipment, maintenance, data capture and analysis for earthquake events.