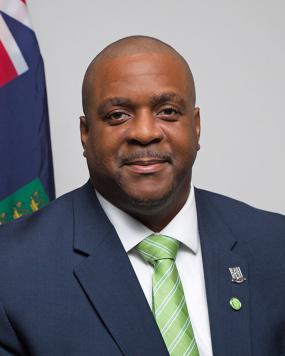 Premier and Minister of Finance

Increases in Fuel Prices, and Other Goods and Services in the VI

With pleasure I say good day and GOD’S BLESSINGS be upon everyone.

I take this time to re-emphasize to the people of the Virgin Islands that your Government remains concerned by the loss of life, physical and mental trauma, and other acts of violence being seen in the conflict between Ukraine and Russia, and which is engaging global attention. We continue to pray for the safety and well being of all who are affected.

As a people we have had to stretch our resolve more than ever since 2017 to cope with the negative social and economic effects of the floods of 2017 along with the two catastrophic hurricanes Irma and Maria. Having not yet fully recovered from those events, we had to yet dig deeper into our resolve as a Virgin Islands people, to have to further learn to cope with the negative social, economic and reputational fallouts of the worse pandemic in the last 100 years, then an imposed Commission of Inquiry and now these developments.

Together let us continue to pray to GOD to protect and guide us through these unprecedented and challenging times, as only HE can sustain us and give us Peace.

Today I come to once again appeal to all of us to start to prepare ourselves for the oncoming economic impacts which I have cautioned above.

Your Government will continue to do all that is possible to help to mitigate against the inevitable economic shocks on the way, which are no fault of your Government.

In this vein, I want to appeal to those businesses in the Virgin Islands that have not received new stock since the recent events began in Europe, but yet have already increased prices with the current stock at hand claiming that the prices of their latest shipment of goods has increased.

The consumers who are there all the time bearing the brunt of the economic storm cannot be forced to do so even further as a result of unjustifiable actions.

Hence, I send this stern warning to inform that Government is watching and is hereby strongly recommending that persons refrain from unethical business practices.

Your Government has set up a task force to monitor prices and to move swiftly to address any business that increases their prices unjustifiably.

Customs will be part of the monitoring team, and so will be the Department of Trade, among others.

On Monday, 14 March, 2022, Customs and other members of the task force will be visiting petroleum companies, gas stations, and other businesses to ascertain information as to the current cost of fuel and other products and match them to the prices paid by those same companies for their last stock received in the BVI for which duty was paid on the price listed at that time.

Each company's increase in prices will be marked from their last imported price on fuel and goods and will be checked against their invoice. Which means businesses will now be required to share their invoices with Government.

Simply put, all prices should reflect the regular mark up on the product received in the last shipment of their product to the BVI.  This current action by your Government will be an ongoing process until further notice.

This week the Task Force assigned to this initiative by Government will be meeting with all service stations and petroleum companies, among other businesses to explain what will be required as we monitor this economical threat.

In addition to the aforementioned, the exercise will also be one to gather ideas to assist in forming strategies for softening, as much as would be possible, the financial blow to consumers and businesses which may lie ahead.

Your Government is fully mindful that some jurisdictions have already begun to experience price increases, including fuel prices. There are reports that a few filling stations have already passed the mark of £2 a litre of diesel. The UK’s Department for Business, Energy and Industrial Strategy, for instance, has reported that the average price of a litre of unleaded petrol went up by 3.7p between 28 February and 7 March, 2022, to just under 153p. Over the same period, diesel prices increased by 5.2p to an average of 158.6p a litre. The cost of filling up a typical 55-litre family car in the UK has gone up by more than £2 in only a week. In the United States, the average price for gasoline this week reached a record US$4.30 per gallon.

Global benchmark oil prices were trading around US$115 a barrel this past week, up from around $80 a barrel at the end of last year. Analysts at JP Morgan Chase and Co and Bank of America predict disruptions to the supply of oil to the global market could push oil prices to US$185 to US$200 per barrel. Experts say prices at the pumps in the US could rise to around $5 per gallon by late May 2022, and forecasters are saying that if oil goes as high as US$200 per barrel, gasoline could reach US$6 - US$7 per gallon.

So, while we understand that there are unavoidable factors that will impact the cost of goods and services, this should not be used by anyone to take advantage of consumers – especially consumers who are coping with other problems.

Your Government is here to protect the interests and well-being of the people of the Virgin Islands at all times, while ensuring there is also a fair balance with the legitimate interests of businesses. In this vein, we will not accept unjustifiable actions that will force further unnecessary financial burden on our single mothers, struggling fathers, and all the people of the Virgin Islands.

Your Government is cognizant that there will come a time when prices will increase as a result of the ongoing war and the economies of scale of the world market, but until then and even then; your Government will continue to act in the best interest of the people of the Virgin Islands.

I ask for the full cooperation of the Task Force when they visit the petroleum companies, gas stations, supermarkets, and the like as we are in this together.

Furthermore, your Government has established an Ad-Hoc Working Group to monitor the effects of the war and to recommend measures for immediate consideration and implementation by Government so as to assist in helping to minimize the economic blow that is inevitable from the effects of the conflict.

My Government and I want to commend the many businesses who continue to carry out their daily business affairs with ethics and with care for the consumers. Those businesses have nothing to worry about when the Task Force comes to their business.

I end by stating that these actions mentioned are not an attack against businesses but an effort to stop price gouging and further, a call for fairness by all stakeholders to the ones who have continued to bear the brunt of economic shocks over the past few years - the consumer - the people of the Virgin Islands.

Your Government will continue to work with our different businesses as we continue to also work for you the people, the consumers.

Rest assured that we will continue to keep you informed on this and other matters as we pilot our Virgin Islands ship through these many unchartered waters.