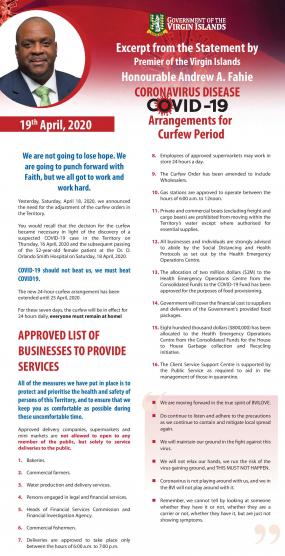 Premier and Minister of Finance, Honourable Andrew A. Fahie has detailed the special arrangements for the new seven (7) day curfew period, April 19 to 26.

Premier Fahie during a live COVID-19 update on April 19 said deliveries were approved for bakeries, commercial farmers, and water production. Approval was also granted for persons in legal and financial services, heads of the Financial Services Commission and Financial Investigation Agency, commercial fishermen, and supermarket staff to work 24-hours daily.

The Premier said all gas stations will be opened from 6:00 a.m. to noon and private and commercial boats excluding freight and cargo are prohibited from moving in the Territory’s waters.

Premier Fahie also announced that food and medication will be given to all families in need and that the district by district distribution will commence on Monday, April 20. Persons in need of food are asked to contact the dedicated Essential Supplies Hotline at 852-7688 for assistance.

The Premier gave an update on the Government’s overall strategy to COVID-19 stating that the Cabinet received and noted the Situation Report for the Health Emergency Operations Centre (HEOC) and reviewed and amended the HEOC Territorial Provisioning Logistical Plan.

He added that Cabinet approved the provision of eight hundred thousand dollars ($800,000) from the Consolidated Funds for the House to House Garbage collection.

The detailed special arrangements came after the Territory’s leader announced that gas stations will be opened during the curfew to serve essential workers. Supermarkets, pharmacies, water delivery will also be opened only for serving deliveries, and approved home delivery services will facilitate deliveries from the supermarkets and delivery of LPG gas.

During the April 18 update, the Premier said that the delivery provision will be prioritised for seniors and vulnerable groups. He added that all businesses other than those approved by the Cabinet must remain closed for the seven (7) day curfew period.

The purpose of the new seven (7) day curfew from April 19, is for health officials to continue the observation process.