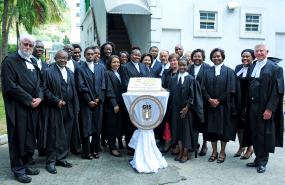 Members of the legal fraternity are pictured with the 50th anniversary cake following the special sitting of the High Court to commemorate the 50th Anniversary of the Eastern Caribbean Supreme Court.

Her Ladyship, the Honourable Dame Janice M. Pereira, DBE, Chief Justice delivered the feature address under the theme, ‘Celebrating the Past, Embracing the Future’.  His Lordship the Honourable Justice Barry Leon presided over the sitting.

The court was inaugurated on February 27, 1967 as a replacement to the Supreme Court of the Windward and Leeward Islands, which served the territories of the Eastern Caribbean that are now members of the Organisation of Eastern Caribbean States (OECS).

The court has jurisdiction in Anguilla, Antigua & Barbuda, the British Virgin Islands, the Commonwealth of Dominica, Grenada, Saint Kitts and Nevis, Saint Lucia, Saint Vincent and the Grenadines, and Montserrat. The institution has also gained renowned success as a superior court of record.