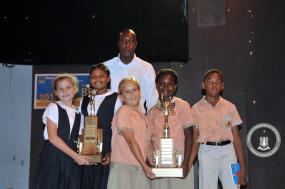 This followed very competitive and intense rounds of the Spelling Bee Finals for the Primary and Secondary schools in the Territory.

Ten primary schools competed in the final round of the 2015 Spelling Bee Competition on March 3 and St. Mary’s School was declared winners. First Impressions’ Primary School placed second while the Willard Wheatley Primary School and Agapé Total Life Academy were both tied for third place.

The Spelling Bee Competition is a joint partnership with the Ministry of Education and Culture and the Rotary Club of Road Town.

The Ministry of Education and Culture is committed to the advancement of the Territory’s students as it endeavours to Create a Culture of Excellence.