Statement by Governor Rankin on the Death of His Royal Highness The Prince Philip, Duke Of Edinburgh

Office of the Governor
Topics:
Her Majesty The Queen
Release Date: 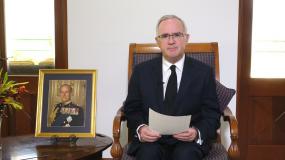 The following statement issued from Buckingham Palace this morning:

“It is with deep sorrow that Her Majesty The Queen announces the death of her beloved husband, His Royal Highness The Prince Philip, Duke of Edinburgh.

His Royal Highness passed away peacefully this morning at Windsor Castle.

Further announcements will made in due course.

The Royal Family join with people around the world in mourning his loss”.

I know the people of the British Virgin Islands will join me in a period of mourning for His Royal Highness The Prince Philip, Duke of Edinburgh and that our thoughts will be with Her Majesty The Queen and the Royal Family at this difficult time. Arrangements will be made both online and in person for those wishing to offer condolences.

Prince Philip gave exemplary and loyal service throughout his life. His Royal Highness served with distinction in the Royal Navy during the Second World War and helped to represent the United Kingdom and its Overseas Territories, to the Commonwealth and across the world for seven decades.

His Royal Highness also inspired countless young people, including my own children, in his pioneering of the Duke of Edinburgh award and he was a friend to the British Virgin Islands, visiting in 1966 and again in 1977. We will remember him with great fondness and respect.

Notes to editors: Condolence books will be available online at the www.royal.uk website and we will be opening a book of condolence on Monday at the Old Government House Museum. This will be open to the public from 11:00 a.m. on Monday until 3:00 p.m., and then 10:00 a.m. until 3:00 p.m. each day until the day before the funeral.