Statement by Junior Minister for Tourism - Renewable Energy For Anegada 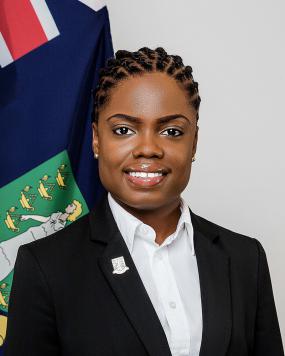 As Junior Minister for Tourism, I am pleased to be here this morning on behalf of Premier and Minister of Finance Honourable Andrew A. Fahie as we turn a new leaf in renewable energy in the Territory, specifically for the people and businesses on Anegada.

Over the past 16 months, your Government, led by Premier and Minister of Finance Honourable Andrew A. Fahie has been committed to renewable energy for Anegada.

One of things we promised to do, when elected, was to make alternative energy not just a conversation, but a commodity to households across our Territory.

The impact on our electricity supply caused by Hurricane Irma in 2017 reminds us of the fragility of traditional sources of energy, which sources are also damaging to the environment.

The impact of climate change globally has been significant especially over the last decade, and the continued use of fossil fuels is seen as a major contributor.

The Virgin Islands is especially vulnerable to the impact of climate change due to changing weather patterns, the increased strength and unpredictability of storms as well as, their potential impact on tourism, other sectors and the overall economy.

The occurrence of the massive flood and two strongest hurricanes in the history of the Atlantic season in 2017 is strong evidence of this.

As such, use of solar, wind, and water as alternate sources of energy must be at the forefront of the Territory’s future energy needs.

We said that during the Elections, BVI was moving forward with the National Energy Transition Policy in a thoughtful and proactive manner in conjunction with the assistance from international partners was something, which must be given the priority it deserves.

This Government is committed to making the use of renewable energy on a significant scale throughout the Territory, a reality.

Within the first month of your Government’s tenure, the BVI Electricity Corporation was mandated to take a leading role in driving the Territory’s transition to Green sources of energy.

In the 2020 Budget Address and at other times, your Government has highlighted that it has embraced the national vision of transforming the Virgin Islands into a leading regional economy by 2025 through entrepreneurship, innovation and local and foreign investment.

We have also set the target of becoming at least 60 percent Green by 2030.

Together and consistent with the theme of the Government’s Legislative Agenda outlined in the Speech from the Throne – “Going Green, Going Smart”, we have adopted certain policies and initiatives to support our movement in the direction of cleaner, cheaper, sustainable, and reliable energy sources.

As a Government we are indeed pleased to see that renewable energy is moving forward on the islands of Anegada, one of the special gems of the Virgin Islands.

Green energy allows us to lower costs and increase productivity, all while creating new industries and new jobs, and reducing pollution.

When this initiative gets on the way, it will spurn job and career opportunities for our people who choose to train, to equip themselves, and to develop and strengthen their competencies as the platform for technology and knowledge transfer takes place.

We must keep pushing ourselves.

This Government has already said that all new public infrastructure projects will embrace smart technology to increase energy efficiency; lower operating costs and reduces the carbon footprint. We are indeed moving in that direction.

As the BVIEC moves forward, commendations and thanks must go to the Chairman of the Board of BVIEC, Mrs Flax, and the rest of the Board, the management Mr. Abraham and the staff. What we are achieving today for the future cannot be achieved without their hard work and dedication to duty. We thank you.

I am excited for the people of Anegada and I look forward to the successful completion of the Hybrid Renewable Energy and Battery Energy Storage System Project on Anegada, and to the continued greening of the British Virgin Islands.