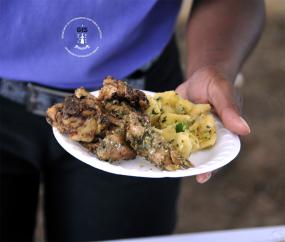 The Ministry of Natural Resources and Labour has implemented a three-pronged approach to reduce the Territory’s reliance on food imports in an effort to increase food security.

Speaking on behalf of Deputy Premier and Minister for Natural Resources and Labour, Dr. the Honourable Kedrick Pickering at the World Food Day celebrations, Permanent Secretary, Mr. Ronald Smith-Berkeley said, “The Ministry supports local farmers, has implemented the use of technology and is developing an agricultural policy.”

“We have and will continue to maintain our focus on the traditional farmer. Over the years, we have provided assistance in many forms with a view to assisting farmers to boost production of various crops and livestock”, Mr. Berkeley said.

The Permanent Secretary further stated that the agricultural policy being developed will transform the industry and yield greater results through better governance.

“While it is not our intent to become self-sufficient, as this is not a viable alternative, we are hoping that these measures will put us in a better place to reduce, even though marginally, our reliance on food imports,” Mr. Berkeley said.

World Food Day is an initiative of the Food and Agriculture Organization (FAO) and has been observed globally on October 16 for the past 35 years.