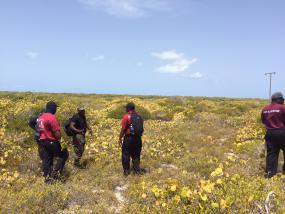 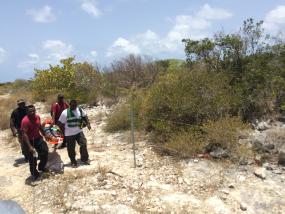 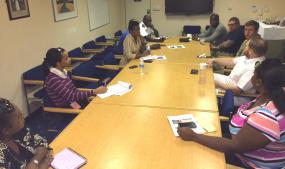 Members of the newly created Territorial Search and Rescue Team (TSART) tested their skills in a simulation exercise staged on Anegada this week.

The exercise jointly organised and executed by the Department of Disaster Management (DDM) and the BVI Red Cross also had the participation of members of the visiting Royal Naval ship, RFA Lyme Bay.

The exercise scenario required the team to search for and rescue four tourists and a local family of three reported missing after significant storm surge affected Anegada during a category four hurricane.

DDM Training Officer, Ms. Carishma Hicks said the exercise was used to test the land navigation skills of TSART, to determine their search and rescue command capabilities and to test the response capacity of the Anegada Community Emergency Response Team (CERT) as well as other assets available on the island.

Ms. Hicks said, “The exercise achieved its objectives and the evaluators have identified areas that need improvement, as well as equipment that the team will require to execute their tasks efficiently.”

The training officer explained that the exercise also allowed members of the TSART to benefit from the expertise of search and rescue specialists from the visiting Royal Navy ship.

She added, “The visiting officers worked alongside the search and rescue team and were able to provide guidance and advice where necessary. We also had the benefit of a communications specialist who was also able to observe and make recommendations.”

At a debrief aboard the RFA Lyme Bay, the British officers praised the camaraderie among team members and the seamless integration of the CERT team which was able to provide good local knowledge to help in the execution of the search.

The Territorial Search and Rescue Team was created in 2014 through a Cabinet decision and comprises 20 officers, with equal representation from the Royal Virgin Islands Police Force and the Virgin Islands Fire Rescue Service.

The team’s mandate is to respond to any land based search and rescue needs that may arise in the Territory using the United Nations International Search and Rescue Group (INSARAG) Standards. The intention is to have the team fully trained to execute marine response as well in accordance with the International Maritime Organisational (IMO) Standards.  It is expected that the training will eventually lead to international certification for the team.

To date, the officers have been exposed to training in maps, compasses and land navigation. Later this year, they are expected to receive training in incident command system, rope rescue, water rescue, advanced communications and search consideration and techniques.

Training and exercising constitute a key component of any disaster management agency and are also critical to achieving improved resilience through the testing of plans and procedures.