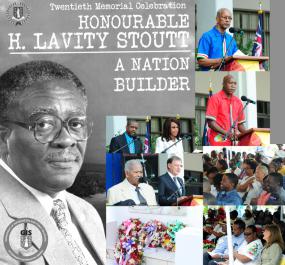 The Territory’s first Chief Minister, the late Honourable H. Lavity Stoutt, was credited as being an exceptional leader and architect of some of the Territory’s most significant projects, at celebrations to mark the 20th year since his passing.

Premier and Minister of Finance, Dr. the Honourable D. Orlando Smith, OBE In his address at the commemorative ceremony held this week pay homage to the late Chief Minister, highlighted the achievements of Honourable Stoutt.

“During his era, our industries grew in leaps and bounds. Health clinics were opened throughout the Territory, roads were improved and expanded, ports were developed in major entry points and  social security was introduced to make our people secure.”

Premier Smith said the Honourable Stoutt led and guided the BVI throughout most of its period of its development as an international financial centre. He said the Chief Minister was also instrumental in the construction of government’s administration building and that he was committed to constitutional reform.

Meanwhile, Minister for Education and Culture, Honourable Myron V. Walwyn said Honourable H. Lavity Stoutt was an exceptional leader who ensured that every resident benefitted from his policies and programmes.

Honourable Walwyn stated, “Today we see the results of this as more of our own people had the opportunity to be educated and are now leaders across many sectors of this Territory”.

Minister Walwyn stated that Mr. Stoutt was not a politician that was afraid of the abilities of his people, but rather encouraged and even inspired those around him to work harder and smarter for the collective advancement of the Territory.

Featured Speaker Mrs. Lorna Smith, OBE, in her address titled “Sounding the Clear Trumpet to Build a Nation” reflected on Honourable H. Lavity Stoutt’s political journey and his unwavering commitment to the Territory.

Mrs Smith also painted a picture of the opposition Mr. Stoutt experienced leading up to the building of the college which has been named in his honour.

“The college was indeed a huge achievement, she said, adding, “It was but one of the many essentials projects that this great man saw critical to nation building. Another of his favourite phrases’ was “A college is a must!”

This year‘s celebrations was held under theme, Honourable H. Lavity Stoutt: A Nation Builder. The celebrations commenced with a commemorative march of uniformed bodies from the House Assembly Building to the Central Administration Complex. A Commemorative Ceremony was held at the Central Administration Complex and the 14th annual Wreath Laying ceremony at his burial site in Cappon’s Bay.

The Ministry of Education and Culture remains committed to celebrating the life of the late Honourable H. Lavity Stoutt as a person of historic significance to the Territory.