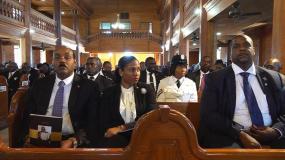 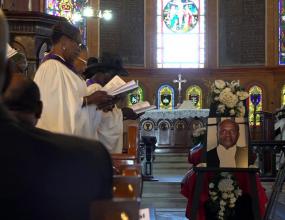 The Virgin Islands joins the rest of the Eastern Caribbean in mourning the passing of His Lordship the late Honourable Justice Albert Redhead.

Justice Redhead served locally at several intervals as a High Court Judge, his most recent assignment in the Virgin Islands extended from 2011 to 2013.

Premier and Minister of Finance, Honourable Andrew Fahie joined the many dignitaries from around the Caribbean including members of the regional legal fraternity to pay their respects to the family and friends of the late judge. The official funeral was held at the St. John’s Cathedral in Antigua.

Premier Fahie said, “I was honoured to join the family, friends, and colleagues in paying tribute and saying farewell to an esteemed son of the Caribbean, Justice Albert Redhead in Antigua on Tuesday. Justice Redhead served the British Virgin Islands and the rest of the region very well throughout the years. We in the BVI value his contribution to our jurisprudence.”

Justice Redhead passed on Monday, March 4 and was laid to rest on Tuesday, March 27.

His appointment as a High Court Judge of the Eastern Caribbean Supreme Court was made in 1985. In 1997, Justice Redhead became an Appeals Court Judge of the same court. He retired in 2003 but was re-appointed more than once thereafter to act as a judge in the High Court in several countries in the OECS.