Territory Day 2017: A Call For A Territorial Awakening 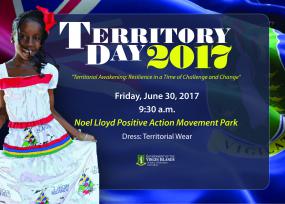 A territorial awakening will be the call for this year’s Territory Day celebrations.

The celebrations will be held on Friday, June 30 at the Noel Lloyd Positive Action Movement park at 9:30 a.m. under the theme, ‘A Territorial Awakening: Resilience in a Time of Challenge and Change’ and will also shed light on the 50th Anniversary of Ministerial Government.

Secretary for the Territory Day Ad-Hoc Committee, Mrs. Brenda Lettsome-Tye, said this year, the committee wants to use the opportunity to stir the consciousness of the people of the Virgin Islands.

Mrs. Lettsome-Tye said, “Historically, at various junctures of our political journey we have faced the challenges of the day by summoning the strength and courage to forge ahead.”

She added, “As we reflect on our political development as a Territory, assess our current status and chart a course for the future, let us not forget the road we have travelled that has propelled us to chart our own course, by pushing to change our situation to shape our own reality.”

In 1960, the Virgin Islands were positioned on the path to nationhood when the symbolic trappings of an independent state, in particular, a Coat of Arms was approved for the colony to be used on seals, banners, flags or otherwise. With the demise of the West Indies Federation in 1962 and the movement towards independence by the larger colonies in the region, the term colony was gradually replaced by Territory.

By the late 1960s, official records referred to the Virgin Islands as a Territory and in 1978, the Public Holiday Act was amended replacing Colony Day with Territory Day.

As part of the improved relationship with the United Kingdom, the Virgin Islands is now referred to as a British Overseas Territory.

Territory Day celebrations will have dance and singing performances and will include remarks by Premier and Minister of Finance, Dr. the Honourable D. Orlando Smith, OBE; Minister for Education and Culture, Honourable Myron V. Walwyn; Leader of the Opposition and Representative for the First Electoral District, Honourable Andrew A. Fahie; and Author, Lecturer and Head of Humanities, Social Sciences and Communications Department, Dr. Richard Georges.

The public is encouraged to attend dressed in Virgin Islands Territorial Wear as the Ministry of Education and Culture continues to create a Culture of Excellence.