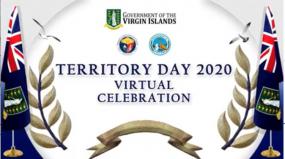 Under the theme, “The March Toward Greater Autonomy: Shaping Collective Pride”, Territory Day focused on self-governance and its history here in the Virgin Islands.

Premier and Minister of Finance, Honourable Andrew A. Fahie said, “The purpose of this day is to reflect on our journey as a Territory, a journey that we are still on. We will continue to move forward with our similarities and differences…[and] we push forward with the spirit of our forefathers on our journey.”

This year’s celebration theme is in line with the Territory’s constitutional review, which is on the Government’s agenda and marks 70 years since the restoration of self-governance.

“As part of our journey, the Virgin Islands has its fourth written constitution in 70 years and we are preparing for a constitutional review exercise, which will commence shortly. This is all part of our revolution as a people and as a Territory as we continuously update our operating framework to ensure it is suited to the time and task ahead”, Premier Fahie said.

There are many changes happening in the world today that will shape the way the world operates and this includes the Territory and its constitution.

Minster for Education, Culture, Youth Affairs, Fisheries and Agriculture, Dr. the Honourable Natalio D. Wheatley, addressed these different changes which are inclusive of the COVID-19 Pandemic and the Black Lives Matter Movement which the British Virgin Islands participated in to show solidarity.

He said while we stand in solidarity with others, it is interesting to examine our situation right here in the Virgin Islands.

He said, “Territory Day has always been a celebration of the Virgin Islands’ journey from a member of the Federation of the Leeward Islands to a stand-alone Territory of the United Kingdom. I submit to you that we should expand our vision, to celebrate every victory that we have achieved on our journey toward greater autonomy and self-determination.”

Dr. the Honourable Wheatley also made mention of The Great March of 1949 and how persons back then stood up for their rights, which resulted in the restoration of the Legislative Council now named the House of Assembly, marking the same 70 years.

During the ceremony, past Chief Ministers and Premiers of the Virgin Islands along with the current Premier were honoured for their contributions in Virgin Islands governance. Honourees included:

To view the ceremony and honouree’s tributes, visit the Government’s Facebook page @BVIGovernment or by using the link: https://www.facebook.com/BVIGovernment/videos/3368923563160088/

Territory day was recognised on Monday, June 29 as a holiday in lieu of July 1. However, persons were encouraged to wear the Territorial fabric or place miniature flags on cars on Wednesday, July 1, 2020 to continue the celebration.

Official records in the 1960s referred to the Virgin Islands as a Territory and in 1978, the Public Holiday Act was amended replacing Colony Day with Territory Day. Today, as part of the improved relationship with the United Kingdom, the British Virgin Islands is now referred to as a British Overseas Territory.