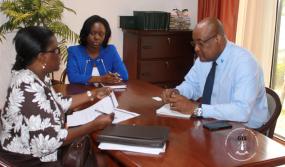 A case study to evaluate the Territory’s implementation of the ‘Port of Spain Declaration’ was facilitated by the Ministry of Health and Social Development this week.

The study is part of Government’s continued efforts to reduce chronic, non-communicable diseases (NCDs) in the Territory.

A three member research team led by Lecturer with the Department of Community Health and Psychiatry at the University of the West Indies, Dr. Michelle A. Harris, visited the Territory to conduct the case study which involves a number of key informant interviews with a variety of persons in the community.

Coordinator of Health Promotions Services and National Focal Point for Non-communicable Diseases Prevention, Ms. Ivy George said, “The results from this case study will hopefully serve to reinforce that the Government is working to comply with the recommendations coming out of the United Nations High-Level Meeting on NCDs and the CARICOM ‘Port of Spain Declaration’.

Ms George added that in an effort to improve the health of the population and reduce the risk of developing NCD’s, there must be collaboration between Government, community, public sector, non-profit organisation and the media.

Caribbean Heads of Government in 2007 issued the fourteen-point ‘Port of Spain Declaration’, in an effort to take collective action to stop the epidemic of NCD’s throughout the region.

Last year marked seven years since the declaration was officially undertaken. A group of regional institutions including the University of the West Indies, CARICOM Secretariat, the University of Toronto, Caribbean Public Health Agency, and Pan American Health Organisation, with support from the International Development and Research Centre of Canada, have been tasked with conducting a formal evaluation of the declaration’s implementation.

In addition to evaluating the territory’s implementation of the declaration, the case study will also attempt to gain an ‘all of Government” and “all of society” view of NCD response.

The Ministry of Health and Social Development has implemented a 10-year strategy to improve health and reduce the rising prevalence of NCD’s in an effort to improve the health, wellbeing and productivity of the whole population and to reduce healthcare and sick day related costs.