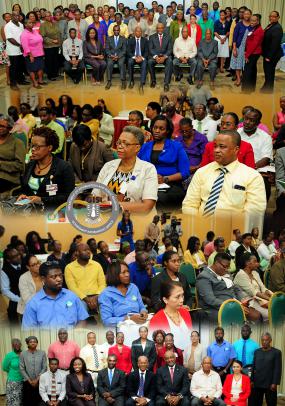 Premier of the Virgin Islands, Dr. the Honourable D. Orlando Smith, OBE has said his Government will continue to put preventive programmes in place to reduce the morbidity levels of residents affected by chronic diseases in the Territory.

Premier Smith delivered remarks at the BVI Conference for the Implementation of the NCD Strategy held on Tuesday to discuss the status of the health of the population.

The Premier outlined four major divisions of chronic disease namely diabetes, cancer, cardiovascular conditions and chronic respiratory diseases.  He said these diseases contribute significantly to morbidity in the population, and can lead to very significant individual, social and economic impact. “The fact that we have 15 seats for dialysis tells you the significance of chronic diseases and in particular renal failure and diabetes in the BVI,” Premier Smith said.

Minister for Health and Social Development, Honourable Ronnie W. Skelton spoke of the importance of prevention and being a more unified healthy community.

Honourable Skelton said Government continues to intensify its efforts to prevent and reduce the burden of chronic non-communicable diseases affecting the Territory.

He said, “Over the past several years the Ministry of Health and Social Development in partnership with various sectors has made a concerted effort to drive home the message that as a community we can be healthier together. Today’s theme of ‘Uniting to Improve Health and Well-being’ is a timely and fitting one.”

The Health Minister added that non-communicable diseases account for a large percentage of deaths in persons in their productive years.

He said the English speaking Caribbean has the highest per capita burden of NCDs in the region of the Americas, and CARICOM Leaders have realised the importance of this issue and are challenging the people of region and the world to unite to stop the NCD epidemic.

Minister Skelton also shared local statistics and appealed to residents to adopt healthy lifestyle changes.  He said, “Here in the Virgin Islands the STEP Survey of 2009 revealed an alarming reality that almost half of the population had one to three of the risk factors common to NCDs including poor nutrition and physical inactivity. Sedentary lifestyle, increased consumption of processed food high in fat and salt and this is the unfortunate result.”

The Health Minister added, “Researchers estimate that if the major risk factors for NCDs were eliminated, over 75% of heart diseases, stroke and type two diabetes would be prevented and close to 40% of cancer would be averted.”

The conference was attended by stakeholders from several sectors including agriculture, education, health, planning, sports and transportation.  Chairpersons from the subcommittees representing key sectors made presentations on alcohol and tobacco prevention and control, physical activity and literacy, the healthy schools initiative and quality care for patients with chronic diseases.

The BVI Health and Wellness Advisory Council is comprised of representatives from the private sector, civil society and government.   It is supported by the Technical Working Group whose primary role is to facilitate cross sectorial collaboration, integration, accountability and sustainability of public sector agency work that will enhance population health and wellbeing.

The Ministry of Health is committed to ensuring that all aspects of the environment are managed efficiently to enable all persons in the BVI to attain and maintain optimal health and well-being.