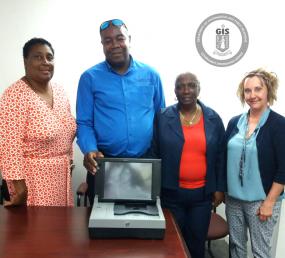 Timely and reliable results can be achieved for the next general election as discussions are on the table for the use of tabulating machines to tally election votes.

Supervisor of Elections, Ms. Juliette Penn, described the visit as productive and of great benefit to the Territory.  She shared that the new proposal can drastically reduce tallying time.

“The process that we use, the time that we spend counting, especially the At-large votes, will be down to a minimum,” Ms. Penn said, adding, “The machines that are being offered will be very helpful to us.  They will not in any way impede the speed of the voting.  As a matter of fact, I think it would enhance it.”

During his one-day visit, meetings were held with Deputy Governor Mr. David D. Archer, Jr.; Permanent Secretary (Ag.) in the Office of the Deputy Governor, Mrs. Carolyn Stoutt Igwe; and Supervisor of Elections, Ms. Juliette Penn. Also present was the Supervisor of Elections for the Elections System of the Virgin Islands (USVI), Mrs. Caroline F. Fawkes who attested that the US Virgin Islands has been using the system since 2012.

She shared that they have seen an improvement over the years with the use of this system. Mrs. Fawkes said, “We too had to hand count,” adding, “We would be counting until 12, 1, 2 o’clock in the morning, but with this system, we received the results by 9:00 or 10:00 p.m.”

The USVI Supervisor of Elections said, “It is very efficient, the machine is reliable and I think the support from ES&S is fantastic.  You can reach out to them 24/7, and you get a response.”

Mr. Wesley of ES&S addressed the Territory’s concern for more timely results.  He said, “We believe we have a solution that would be very helpful for the BVI.  You have a desire to have election results sooner on election night so I came to introduce a tabulator called the DS200 that will actually give you results faster on election night.”

As stated on the website, “The DS200 is a precinct-based scanner and vote tabulator equipped with the latest in ES&S’ patented technology. Fully certified and compliant with EAC guidelines, the DS200 enhances the voting experience for voters and election officials alike.”

Having had the opportunity to review the ballots used in the Territory’s General Elections, Mr. Wesley will return later this year with customized ballots to conduct demonstrations of the system with Government officials and other stakeholders before submitting a formal proposal.

The Office of the Supervisor of Elections provides with integrity general direction and supervision over the registration of voters; imparts efficient, reliable and courteous service to the General Public and is responsible for the administrative conduct of free and fair elections in the Virgin Islands.