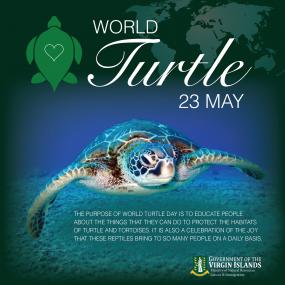 Minister for Natural Resources, Labour and Immigration, Honourable Vincent Wheatley has said that turtles and tortoises are a fundamental part of marine life in the BVI as they play a vital role in the natural balance of its ecosystems.

Honourable Wheatley was speaking on the observation of World Turtle Day held annually on May 23 to spread awareness about tortoises and turtles and to aid in the efforts to ensure their survival.

Honourable Wheatley said, “Due to manmade factors like pollution and overfishing, these turtles and tortoises have been having increasing difficulty to repopulate and to thrive in our waters. I encourage everyone to do their part in ensuring that our waters are free of plastics and other debris as these creatures attempt to ingest those objects and harm themselves in the process.”

He also reminded persons who fish for these reptiles to be cognisant of the dates for their open and closed seasons.

World Turtle Day was founded in the year 2000 by the American Tortoise Rescue (ATR). The goal is to educate people what they can do to protect the habitats of turtle and tortoises. These include refraining from purchasing tortoises and/or turtles from pet stores, leaving turtle nurseries undisturbed and adhering to the open and close season announcements as they relate to turtles and tortoises in the Territory.

Turtles and tortoises are among the world’s oldest species. More than half are endangered due to diseases, habitat destruction and overfishing.

Persons can observe World Turtle Day by participating in any activity that contributes to the overall prosperity of the reptiles including wearing green or actively engaging in beach clean-up activities. For more information on the ongoing Territory-wide clean-up campaign, please contact the Premier’s Office at 468-2152.