‘Twice She Struck’: A Story Of RMS Rhone To Be Launched June 29 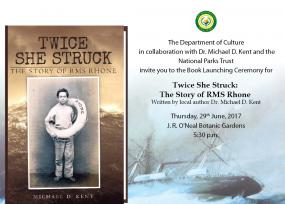 A book dedicated to the memory of persons who lost their lives aboard the RMS Rhone in 1867 will be launched on Thursday, June 29.

The book, titled ‘Twice She Struck: A Story of RMS Rhone’ is penned by Dr. Michael D. Kent and will be launched through the collaborative efforts of the author, National Parks Trust of the Virgin Islands and the Department of Culture.

Twice She Struck: A Story of RMS Rhone recounts the story of a powerful hurricane smashing into the Virgin Islands, resulting in loss of lives, shipping, and property on an unprecedented scale. The Rhone, pride of the Royal Mail Steam Packet Company fleet, fell victim to the storm, crashing onto Salt Island in the British Virgin Islands before splitting in two and sinking with most of her crew and passengers.

Director of the Department of Culture, Mrs. Luce Hodge-Smith said, “As the Territory commemorates 150 years since the RMS Rhone wrecked off the coast of Salt Island on October 29, 1867, it would be remiss of me not to note how timely this book is.”

She added, “What Dr. Kent and his contributors have done with this book is treasurable and important in understanding the longstanding relationship shared between the Virgin Islands and the United Kingdom. Additionally, it answers and debunks all the myths and fables surrounding the wreckage in 1867.”

Author, Dr. Michael D. Kent said the book serves an account of the Rhone’s story, both above and below the water.

He said as a child, he had always been fascinated by shipwrecks but his personal interest in the RMS Rhone began in 1994 when he was a young diving instructor and began visiting the wreck site daily.

He added, “After being forgotten about for more than a century, this Victorian shipwreck today captivates divers, snorkelers, sailors, historians, explorers, photographers, and daydreaming schoolchildren.”

The official launch will be held at the J.R O’Neal Botanic Gardens at 5:30 p.m.

Persons are encouraged to attend and support the event as the Department of Culture continues to support local authors and develop the Virgin Islands’ cultural heritage and traditions.

For more information on the latest addition to the literary collection in the BVI, persons can visit the Government of the Virgin Islands’ YouTube channel or use the following link to view the interview with author, Dr. Michael D. Kent and Director of Culture, Mrs. Luce Hodge-Smith at https://www.youtube.com/BVIGovernment.