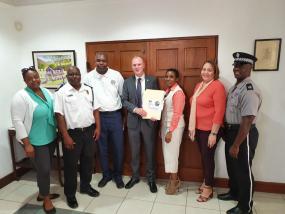 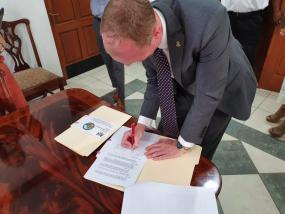 The United Kingdom Foreign and Commonwealth Office will provide specialised training and equipment to the Virgin Islands Territorial Search and Rescue Team (TSART) through a Memorandum of Understanding signed yesterday at Government House.

The agreement outlines the provision of £200,000 (US$261,106) in training and specialised equipment that will increase the Territory’s capacity to respond to emergencies that involve missing or stranded persons on land or at sea.

During the signing ceremony, His Excellency the Governor said that both the UK and the Virgin Islands’ governments are deeply committed to comprehensive emergency preparedness, of which search and rescue is one component.

The Governor added, “One of my main responsibilities is ensuring the security of all the citizens in our Territory and search and rescue, whether it is on land or at sea, remains a vital component of that.”

In addition to special training to improve their ability to safely find missing persons, the MOU will facilitate TSART members having access to trauma kits, personal safety equipment and other items needed during search and rescue operations.

Governor Jaspert said that he was delighted that the agreement includes training for TSART members, which will improve the safety and security of the Territory for years to come.

He further added, “This support is just not money coming in that is a one-off. It provides kits, yes, but it also provides training and capacity building. This increases our capabilities to respond locally to those emergencies that require specialised skills.”

The Governor went on to explain that the agreement will put the Territory in good standing to be recertified by the Emergency Management Accreditation Programme later this year.

The 24-member-TSART includes officers from the Royal Virgin Islands Police Force, Her Majesty’s Customs, BVI Fire and Rescue Services, and the BVI Airport Fire Service. The team was established by Cabinet in 2014 and works together with voluntary organisations within the Territory to respond to emergencies that require search and rescue operations on land and at sea.