Virgin Islands History And Culture Must Be Told To The World 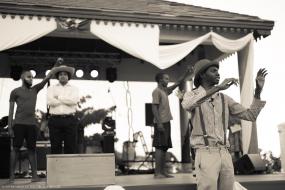 Minister for Education, Culture, Youth Affairs, Fisheries and Agriculture, Dr. the Honourable Natalio D. Wheatley said the Virgin Islands have a special history and culture that must be told to the world.

Honourable Wheatley was addressing attendees at the Delores Christopher Festival of the Arts which honoured several cultural stalwarts and showcased different aspects of the Territory’s culture through the arts.

The minister said, “It is time for us to tell our story to the world. We will not fall, we will be here toiling and celebrating those who have walked before and have built the foundation.”

Several persons were honoured on the day including Eileene L. Parsons, Reuben Vanterpool, Dr. Quincy Lettsome, Verna Penn-Moll and the late legislator Delores Christopher, in whose honour the festival was named.

“[Delores Christopher] was a Virgin Islander to the bone. She did not compromise. She was passionate and I loved her for that. And I thank the family for allowing us to honour her in this way and for being so supportive,” Honourable Wheatley said.

Honourable Wheatley who is also the minister responsible for Culture said the he wishes to see that the festival is hosted more than once a year.

“This is a time to introduce persons who are visiting us and who have come to live among us to the beauty of Virgin Islands culture.”

a cultural dance. The 1949 March for the removal of Commissioner Cruickshank and for the commencement of a Legislative Council was also highlighted in commemoration of its 70th anniversary.

The Association for the Promotion of Arts and Culture hosted the festival. The group is comprised of the BVI 2019 Carifesta delegation which includes poets, graphics designer, painters, dancers, fashion designers, film makers, photographers and storytellers.