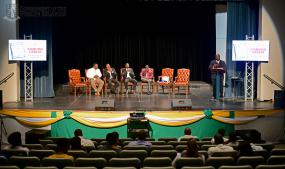 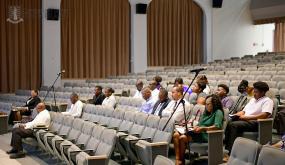 The first of three sessions to train Virgin Islands Youth Parliament nominees on all aspects of House of Assembly proceedings was held on Tuesday, March 10.

The nominees were chosen by all 13 members of the House of Assembly along with the Speaker of the House and the Director of Youth Affairs and Sports.

Honourable Julian Willock stated that members of the Youth Parliament will be given an opportunity to learn the important principles of governance and democracy, as well as, how the House of Assembly functions.

He said, “During our workshops and training, youth parliamentarians will learn about the Standing Orders of the House of Assembly, the role of the Speaker, the Constitution, the history of the Legislature, the art of debate and public speaking and how to dress for success as young parliamentarians.

Honourable Willock assured the youth parliamentarians that at the end of their tenure they will possess a greater sense of national awareness, as well as an improvement on their leadership skills.

He said, “All of you will be very versed on how parliament works, the importance and role of the legislative branch, the art of public speaking and debate, the topical issues affecting the Virgin Islands, just to name a few.”

The items listed for Tuesday’s workshop included Objectives for the Youth Parliament by Speaker of the House of Assembly and Chairman of the Special Select Committee, Honourable Julian Willock; The history of the Legislative Chamber/Council in the BVI presented by Dr. Angel Smith; The role of the Legislative Branch presented by Honourable Julian Fraser, Representative for the Third District; and the Standing Orders presented by Ms. Phyllis Evans, Clerk of the House of Assembly.

The Virgin Islands Youth Parliament will be comprised of a cohort of 40 young people from all districts ranging from the ages of 18 to 35. The nominees are selected from among other youth organisations, churches and nonprofit organisations.

The next workshop session is scheduled for Monday, March 23, followed by the official launch of the Virgin Islands Youth Parliament on Monday, March 30.