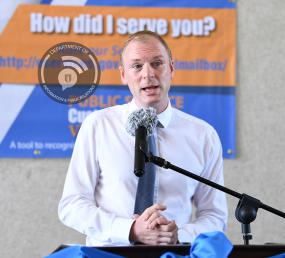 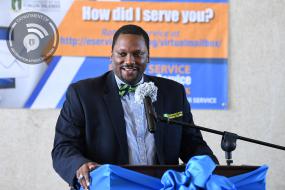 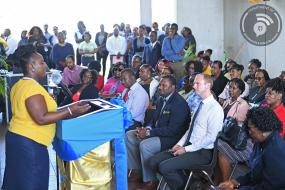 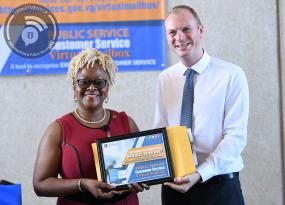 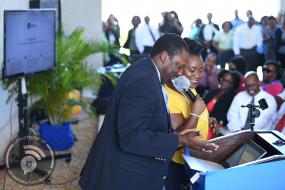 His Excellency the Governor Augustus J. U. Jaspert stated that he fully supports the programme, since at the core, the role of a public officer, is still one the best opportunities to be presented with.

The Governor shared that each morning, public officers wake to serve the public and this fantastic Territory.  He said that while the Cabinet approved Public Service Transformation programme has a lot of different, exciting and difficult elements which require dedication, time and money, “at the end of it, we will emerge as a public service that is even better for the future.”

Deputy Governor Mr. David D. Archer Jr. said he was pleased to continue the journey of Public Service Transformation and encouraged officers to employ trust. He thanked all present for their support of the Virtual Mailbox which is expected to make the Public Service even greater.

“We are on an amazing journey,” the Deputy Governor said, asking officers to, “Trust the process, trust yourself and trust your greatness.  We will be, in the near future, between number one and number five in the business of public service.”

Meanwhile, Director for the Department of Trade, Investment Promotion and Consumer Affairs, Mrs. Karia Christopher stated that she fully endorsed the programme which has an element of the unknown and provided a response on behalf of the nine early adopter departments.

“This virtual mailbox allows the public to compliment us and give us feedback, and yes, gives us pointers on what we need to improve.  For many of us, this type of openness injects the fear of the unknown,” Mrs. Christopher said. She cautioned officers not to take any negative feedback personally and urged Heads of Departments to support officers through this new process.

The Director of Trade thanked the Government for its commitment in ensuring public officers remained employed and for the consistent remuneration in the challenging times post hurricanes Irma and Maria.  This commitment she said, should be the chronicle point for all public officers to provide the best service to the public

Private Secretary to the Deputy Governor, Ms. Kedimone Rubaine, while providing an overview of the Virtual Mailbox programme and the exclusive Star Membership Club detailed the process from inception to completion and the steps that are taken when a member of the public submits a negative or positive survey.  The programme was chaired by the Acting Permanent Secretary in the Office of the Deputy Governor, Mrs. Carolyn Stoutt Igwe.

The mailbox is designed to answer the question, ‘How did I serve you?’  It provides a source of transparency and accountability in the area of customer service as the Public Service transforms to attain ‘Public Service Excellence’.