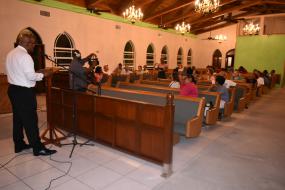 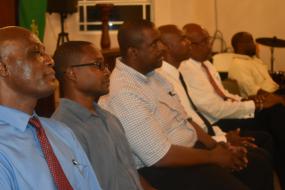 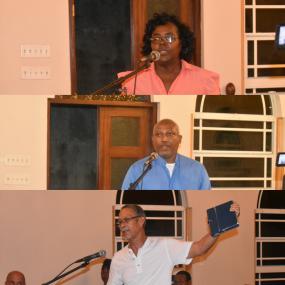 Minister for Health and Social Development, Honourable Ronnie W. Skelton said  the Department of Waste Management and the ministry has experienced several challenges in managing unprecedented volumes of waste and debris as well as issues surrounding the fire at Cox Heath debris site and, more recently, the Pockwood Pond waste management site.

Honourable Skelton said, “We recognise that the smoke has caused some serious discomfort….so it is important for you to be as frank as possible with us so we can find solutions or we can answer your questions and tell you exactly what we are doing about some of these things.”

Manager of the Department of Waste Management Mr. Greg Massicote reported that the department has collected a half a million cubic yards of debris on Tortola alone.

Mr. Massicote said, “In an ordinary year, we are looking at 30,000 tons of residential waste and from September 6 until now we are processing 100,000 tons……so our systems have been exhausted and the Department of Waste Management continue to press forward and to work with what we have to keep the system going.”

He called on to the public to reduce the volume of materials that enter the waste stream and highlighted certain recycling initiatives that were underway.  He said the incinerator machine was designed to process 100 tons of waste per day most of which is covered with soil to help mitigate against fires and now has been processing 180 tons of waste per day.

Residents voiced their concerns on the negative impacts of the recent fires in Pockwood Pond and Cox Heath and suggested ways in which government can re-structure their plans to meet the needs of the communities. The meeting concluded with several residents volunteering to participate in a consultation group to be formed by the ministry to facilitate ongoing communication on waste management issues.

The Ministry of Health and Social Development aspires to provide a caring and integrated system of health and social services that facilitates the recovery of human development and quality of life in the British Virgin Islands.

Caption 3 of 3- Residents who expressed their concerns and ideas to address waste management at the community meeting held September 4. (Photo Credit: Adrianna Soverall/GIS)