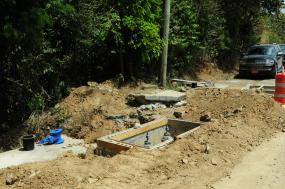 The Government of the Virgin Islands has stated that the water distribution network is still a major priority as plans are set to continue various upgrades within the Territory.

Premier and Minister of Finance, Dr. the Honourable, D. Orlando Smith, OBE in his 2017 Budget Address under the theme: ‘Charting the Course: Positioning the Virgin Islands for the Future’ said, “Throughout 2017 we will upgrade the water distribution network to ensure that every community and resident have access to the public water supply.”

These upgrades will be seen in areas like North Sound, Virgin Gorda, where the treatment plant is now producing 50,000 imperial gallons per day.

Permanent Secretary for the Ministry of Communications and Works, Mr. Anthony McMaster said that negotiations have been conducted with Aqua Designs, with regards to the North Sound Facility and an increase in the production capacity in North Sound is expected to reach 200,000 imperial gallons per day.

The Handsome Bay water treatment plant was upgraded in 2016 to supply 430,000 imperial gallons of water, a 380,000 increase from the previous supply rate to meet the demand in that area.

Other water distribution improvement plans for 2017 include the continuation of expansion works on water mains in Spring Ghut, installation of an additional pump station in the Long Trench area, connections from the Capoon’s Bay water plant to Cane Garden Bay and Ballast bay and also the commencement of water supply to resident in Brewers Bay.

Mr. McMaster said, “We were able to loop Brewers Bay (into the water network) and we intend to commence the distribution of the water in that area within the next six to eight weeks, where persons within the Brewers Bay area who do not have access to public water yet, will now be able to fill applications at the Water and Sewerage Department to obtain a connection.”

The Ministry of Communications and Works continues to uphold its mandate in providing world standard public utility infrastructure and thanks the public for its patience during these times.