Wharf To Be Named After The Late Omar Wallace Hodge 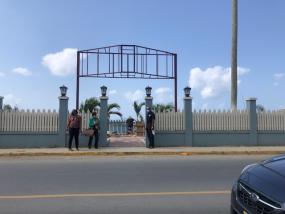 The old fisherman’s wharf at Baugher’s Bay is slated to be named after the late Omar Wallace Hodge.

The Cabinet of the Virgin Islands approved the naming of the Baugher's Bay Marina Development/Fisherman's Wharf and Park to the "Omar Wallace Hodge Fishermen's Wharf and Park" in honour of the former legislator on January 13.

Sixth District Representative, Honourable Alvera Maduro-Caines, said the development of the wharf was the vision of the late legislator.

“It has always been a pet peeve of his. When I got elected and looked at the plans, I saw where he wanted to develop the old fisherman’s wharf. So we decided to go along with the plan and it’s only right that we give him his accolades and name it after him,” Honourable Maduro-Caines said.

The wharf is also said to be a place treasured by Mr. Hodge as it held sentimental memories of his childhood.

Eldest son, Jeremy Hodge said, “He would have spent most of his boyhood and young professional days of his life there. In addition to the community centre, this was one of the projects of which he was most proud and fond. I see this as acknowledgement of his contributions to the Territory of the Virgin Islands.”

He added that he is happy and grateful that given all the work that his father has done over the years as the Sixth District Representative that the current representative and the Government of the Virgin Islands found it fitting to name the wharf in his hounor.

The naming of the Omar Wallace Hodge Fisherman’s Wharf and Park will take place on Monday, April 26 at 3:00 p.m. and will be streamed LIVE on Facebook @BVIGovernment. All are invited to tune in.