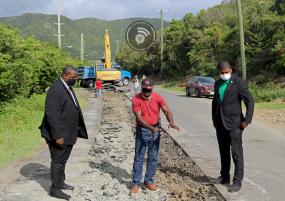 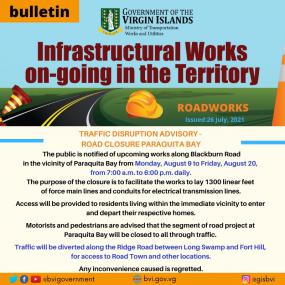 Minister for Transportation, Works and Utilities, Honourable Kye M. Rymer has said the recommissioning of works for the East End Long Look Sewerage project will be undertaken in a three (3) phased approach.

Honourable Rymer said the project which commenced on August 11 is the beginning of the second phase, with the installation of approximately 1300 linear feet of force main lines leading to the Paraquita Bay treatment plant.

“We will focus on the installation of gravity lines, pumping mains and house lateral pipe laying. This will be done between the communities of Parham Town to Paraquita Bay”, Honourable Rymer said.

Premier and Minister of Finance, Honourable Andrew A. Fahie was on site to witness the commencement of works on the East End Long Look Sewerage project which is part of the National Sewerage Programme. Honourable Fahie said he was excited that the long-awaited sewerage project is underway.

“I want to thank the Honourable Kye Rymer, under whose ministry the works were started, and the Ministry of Finance and their project team,” the Premier said. He added, “There is a lot of work to be done and we will work to get this completed in different phases.”

Deputy Premier, Minister for Education, Culture, Youth Affairs, Fisheries and Agriculture and Seventh District Representative, Dr. the Honourable Natalio D. Wheatley was also on site and said he was happy with the restart of the project.

Honourable Wheatley said, “We have daily occurrences of persons who are not able to properly dispose of their sewerage water.  You see it in the roads, and of course it is unsightly and unhealthy.”

The minister also expressed excitement with the joint venture with BVI Electricity Corporation in building resilience into the electricity infrastructure by burying cables instead of having them installed above ground.

The works in Paraquita Bay are projected to last for approximately two (2) weeks, resulting in road closures daily from Tuesday, August 10 to Friday, August 20 from 7:00 a.m. to 6:00 p.m. daily.  Access will be provided to residents living within the immediate vicinity to enter and depart their homes.

Motorists and pedestrians are advised that the segment of the road project at Paraquita Bay will be closed to through traffic.  Traffic will be diverted along the Ridge Road between Long Swamp and Fort Hill, for access to Road Town and other locations.

The Ministry of Transportation, Works and Utilities remains dedicated to ensuring the continued development and maintenance of public infrastructure in keeping with international standards so that the public utilities are reliable and affordable in support of an enhanced community life for every resident and visitor in the Virgin Islands.