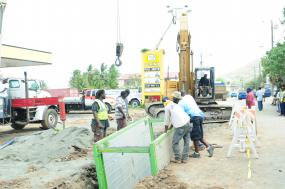 The National Sewerage Project continues with preparation work to begin the installation of force main pipes from Brandywine Bay to Paraquita Bay.

Permanent Secretary for the Ministry of Communications and Works, Mr. Anthony McMaster explained, “Force mains move effluent or wastewater under pressure by using pumps or compressors located in lift stations. The force mains being installed are for effluent outfall at Brandywine Bay.”

“The force main work is expected to be completed by March 2017. However, works from Brandywine Bay to Paraquita Bay is expected to be finished within six to eight weeks. If this work is done ahead of schedule, we will push to install more pipes before the holiday season,” said Mr. McMaster.

Phase I of the force main project is almost complete. This includes the installation of 2,000 feet of 10-inch high density polyethylene or HDPE pipes .These pipes will be connected to Paraquita Bay and then connected to areas in Long Swamp, Parham Town and Major Bay.

The force main project is being managed by Autland Heavy Equipment Limited and involves the installation of over 17,000 feet of 10, 8 and 6-inch pipes between Paraquita Bay, Brandywine Bay, Long Swamp, Parham Town and Major Bay. Saw cutting on the road began this week for pipe installation next week. Motorists are advised to drive with extreme caution in these areas and to follow all road signs.

Mr. McMaster said that each pump station will be equipped with two non-clog pumps with a built-in grinder system to shred all unwanted debris which may have gained entry into the sewer system, adding, “This technology is new to the Territory and will solve the persistent issue of inadequacy with the current sewerage system.”

“The completion of the National Sewerage Project will give residents access to a modern sewage collection and treatment system and will put an end to the current methods of sewerage waste disposal with the implementation of an environmentally friendly solution,” said Mr. McMaster.

According to the latest progress report, the gravity mains between Chapel Hill and Parham Town; and between Fat Hogs Bay and Long Swamp are complete. Work between Parham Town and Long Swamp for gravity main installation is pending and will commence early 2017. Overall, the East End portion of the National Sewerage Project is expected to be 50 percent complete by the end of the year and 100 percent complete by mid-2017.

The Government of the Virgin Islands has pledged to continue working towards the completion and delivery of a working National Sewerage System. Major upgrades have been made to the current sewerage system in Road Town which is now complete.