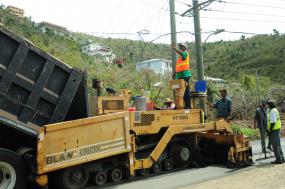 The Ministry of Communications and Works is moving towards implementing a world-class transportation and infrastructure system   as the public service enters its transformation.

Deputy Permanent Secretary for the Ministry of Communications and Works, Mr. Jeremy Hodge said that remedial works are being carried out now on the road and water networks and plans are in place to permanently address issues related to these networks.

Mr. Hodge said, “We are planning roads that are resilient and partnered with utility companies such as electricity and telecommunication companies, so that when we put these roads down we take into consideration future development.”

He added, “We don’t want to put down roads today and then utility companies want to get under our brand-new roads to develop. Also in the event of a hurricane, wires will already be underground that will allow for a faster recovery of these utilities.”

Sidewalks and handicap access catering to a public of different needs will be of high priority for the new road network in keeping with world standards.

Mr. Hodge stated that a modern sewerage system is also at the top of the list.

“We have support advice from UK technicians that have been sent by the United Kingdom government and local technicians working along with them to receive their requisite training and skill set, so that when we develop these modern infrastructures we can actually maintain them,” he said.

Policies are being reviewed on the development and maintenance of the Territory’s infrastructure and ties will be created with the private sector in the transformation process.

The Deputy Permanent Secretary further added that other plans for the transformation of the ministry include a modern, and a cost-effective West End port facility for which drawings are complete.

He said, “The minister has been in vigorous negotiations and we have formed Public Private Partnerships with persons who have volunteered their time and funds. The minister will at a later stage present the drawings to the community.”

Proper temporary accommodations are being sought to facilitate services at the West End port in the interim.

The Ministry of Communications and Works is dedicated to ensuring the continued development and maintenance of public infrastructure in keeping with international standards.