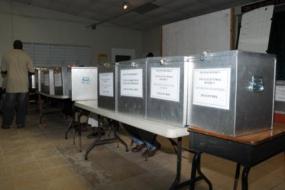 The Elections Office is informing the public of the appointment of Returning Officers for the upcoming General Election scheduled for June 8.

On May 12, by virtue of the power and authority vested in the Permanent Secretary, Deputy Governor’s Office, under Regulation 2 of the Public Service (Delegation of Powers) Regulations, 2015 and of all other powers and authorities thereunto, the Permanent Secretary, Deputy Governor’s Office, has appointed the following persons as Returning Officers for the 2015 General Election:

Returning Officers are responsible for the conduct of the elections in the districts to which they are assigned. They are expected to be impartial, resourceful, and to perform well under pressure.

For further information please contact the Office of the Supervisor of Elections at telephone 468-4380 or 468-3701 extension 4380 between the hours of 8:30 a.m. and 4:30 p.m. The office is located on the ground floor of the Ulric Dawson Building, No. 6, Russell Hill Road, Road Town, Tortola.