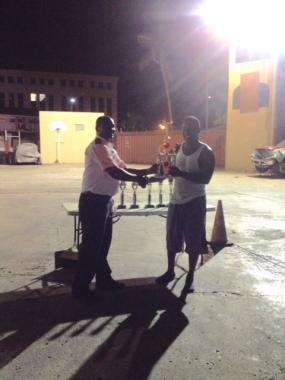 Fire Officer Cleve Davis has been declared this year’s Iron Man, after having completed the Endurance Drill/Challenge in nine minutes.

Fire Officer #58 Keone Maduro was second in 9:24, while Fire Officer Romney Thomas placed third with a timing of 9:26.

Chief Fire Officer, Mr. Zebalon McLean, said the event was part of Fire Safety Awareness Week. He added, “The event is formulated to test each firefighter’s ability to endure certain obstacles that they may face during a real fire, and also to test their level of physical strength and conditioning.”

Challenges in this year’s Endurance Drill, included hoisting a 60 pound container to the top of a three story building, pulling a 300+ pound sled for approximately 50 feet and dragging a 168 pound dummy to safety. Each team comprised of three officers.

As a part of activities to observe Fire Safety Awareness Week, students were also able to join in on the fun and participate in the radio quizzes during the week. The radio quizz winners are:

Fire Safety Awareness Week 2015 was held under the theme “Fire and Smoke Kill; Stop Them Before They Start!”