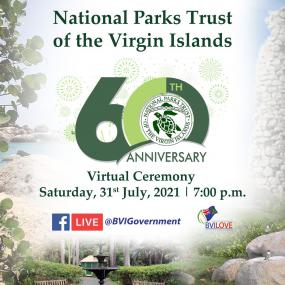 Minister for Natural Resources, Labour and Immigration Honourable Vincent O. Wheatley while congratulating the Trust on its achievement said, “The NPTVI has played and continues to play a vital role in the sustainability of the natural resources and the environment of these Virgin Islands. The invaluable work that they do day in and day out to preserve and protect our environment does not go unnoticed.”

Acting Permanent Secretary Mr. Joseph Smith-Abbott recalled what he called fond memories of his time at the NPTVI. He said, “Firstly I would like to congratulate the NPTVI on achieving this incredible milestone. Sixty years after, it continues to grow, it continues to conserve and preserve all of the resources that are important to us as a people. That includes biodiversity and historical sites as we educate and make the public aware of the significant natural and historical resources.”

His Excellency the Governor Mr. John J. Rankin, CMG also commended the Trust on its 60th anniversary and for its outstanding work in the conservation of these unique and diverse areas.

“It is vital that the world recognises the importance of conserving the beauty and wonder of our natural environment here, and that all of us play our own part in ensuring that these unique areas are preserved for future generations to experience and enjoy,” Governor Rankin said.

The National Parks Trust of the Virgin Islands is managed by a Board of Directors appointed by the Government of the Virgin Islands, which collaborates closely with the Ministry of Natural Resources, Labour and Immigration and government departments. Over the years, the Trust has grown from a voluntary organisation to one that is now professionally staffed. Their responsibilities have also increased from managing one national park (Sage Mountain) in 1964 to managing 21 national parks in 2017, and it is anticipated that more parks will be declared in the future.

The Trust’s work also includes Species Restoration, Marine Conservation, Reforestation, Biodiversity Research & Conservation, Environmental Education and Historical Preservation. Mr. Joseph Reynold O’Neal was the first Chairman of the National Parks Trust, when its first office opened in 1967. The Botanic Gardens are named in his honour for his efforts in conservation in the Virgin Islands.

A virtual ceremony will be held on Saturday, July 31 at 7:00 p.m. to commemorate the National Park Trust’s 60th anniversary. The event will be streamed live on Facebook. The public is encouraged to tune in to the Government’s Facebook page @BVIGovernment.

The NPTVI continues to preserve and manage designated natural and cultural areas to improve the quality of life in the Virgin Islands.