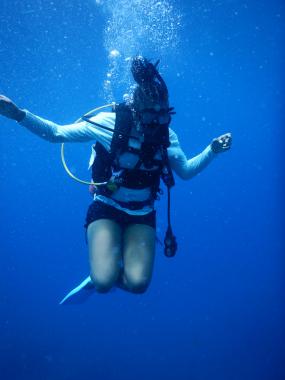 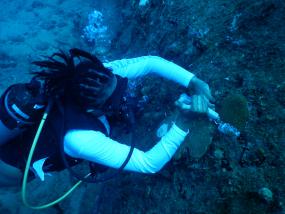 Marine Biologist in the Environment and Climate Change Unit Ms. Argel Horton is being featured by the Marine Conservation Society along with two (2) other prominent Caribbean Scientists and marine conservationists as they celebrate Black in Marine Science Week 2020, from November 29 to December 5.

In the Black in Marine Science feature, Ms. Horton expressed that she has had a passion for the sea and the environment from a young age, which was a result of the many adventures that she had with her father Mr. Alvin Horton, who was a captain and fisherman. The knowledge that Captain Horton shared with Ms. Horton about ocean life captivated her and fostered her interest with all the wonders of the sea, which led her to pursue academic studies related to the environment.

Ms. Horton said, “I enjoy the ability to constantly learn. One of my most memorable moments was when I did an ocean exploration mission aboard the Nautilus research vessel. Scientists were conducting research at the sea mounts within the BVI’s territorial waters. They collected geological, biological and chemical water samples and mapped the area with multibeam bathymetry. I saw and learned about deep sea corals and the fauna that resides along the summits of the sea mounts.”

Ms. Horton added that she loves that her job is not stagnant and that she enjoys sharing knowledge with others and seeing their eyes light up when she tells them about the environment. That is what inspires her to continue to doing her best to preserve the natural resources in the Territory.

When asked what she hopes to achieve with her work in the Territory, Ms. Horton said “I am hoping for a better environment for all. I think we need to have a fair and equitable balance where we can develop with greener technologies and incorporate best practices in the way we live to reduce our impacts on the environment and species.”

The Ministry of Natural Resources, Labour and Immigration congratulates Ms. Horton and is extremely proud of her work. The ministry will also continue to inspire the current and future generation of scientists as it effectively manages and administers the natural resources of the Territory in a manner that ensures long term sustainability.