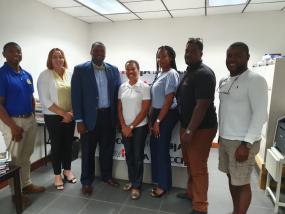 Deputy Governor, Mr. David Archer Jr. met with the Board of Directors of the BVI Chamber of Commerce and Hotel Association’s (BVICCHA) to raise awareness as to how the business sector is expected to respond in relation to the closure of the Public Service following a disaster.

The meeting followed a request from the Board to meet with the relevant agencies to discuss the national disaster preparedness and response protocols relating to public sector closures and its effect on the private sector following the passage of Hurricane Jerry and Tropical Storm Karen earlier this year.

Members of the Board said that many businesses experience uncertainty relating to the expectations of employers during disaster situations or periods of heightened alert when closure of the Public Service is necessary.

Members also acknowledged the need to safeguard the community ahead of impending storms, but felt that discussions are needed to provide a standard tiered response so that businesses are educated on how they can be in alignment with public sector responses.

They reiterated the need for them to ensure the safety of their employees and members of the community and to mitigate disruption of commercial activity as much as possible.

Deputy Governor, Mr. David Archer Jr, while addressing the concerns of the Board said that whenever there appears to be an imminent threat, Government agencies work together under the guidance of the National Emergency Operations Centre (NEOC) to decide the best way to respond to that specific threat. He said that although there is a consistent approach to how the Government responds to all hazards, the priority remains safeguarding lives, property and livelihoods, and actions taken including measures like a full or partial shut-down of the public service or a Territory-wide curfew.

Mr. Archer Jr. explained that these decisions will vary according to the intensity of the threat in question while bearing in mind the need to protect the well-being of more than 3,000 public officers who are also educators and administrators with children in their care and are working in spaces spread far and wide across the Territory including on the sister islands.

The Deputy Governor noted that the issue of whether to enforce the shutting down of portions of the public service or the enacting of a Territory-wide curfew was an order that would come from the Governor, but said that he understood the concerns of the members in attendance. He underscored the Government’s commitment to ensuring that the necessary plans are in place for the overall protection of the people of the Territory.

Mr. Archer Jr. also encouraged businesses to reach out to the Department of Disaster Management to gain assistance in the development of Business Continuity Plans and to organise training for their staff.

He said that it was refreshing to exchange thoughts on the critical subject of Disaster Management with the board members. “What is even more encouraging is the partnership we have formed,” the Deputy Governor said adding, “I am elated and eager to have you partner with us. If the level of discourse we experienced is indicative of our new partnership, we have great times ahead, bringing light and accountability to the subject of Disaster Management in the British Virgin Islands.”

The BVI Chamber of Commerce and Hotel Association's (BVICCHA) mission is to empower, educate, and equip BVI businesses for their success and growth while serving as a confident and proactive voice and a driving force for business development and economic growth in the Territory.