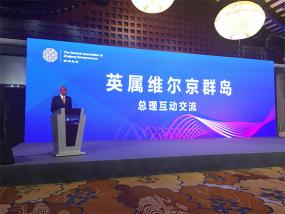 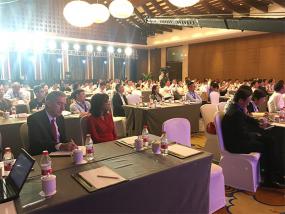 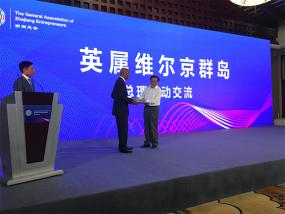 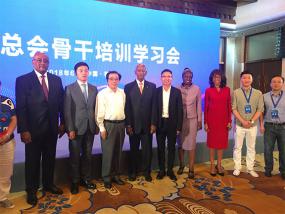 The 2018 BVI Asia Trade Mission to five Asian cities completed its successful and productive two-week roadshow on Friday 15th June, with BVI hosting a trade conference in Shanghai with the theme “BVI: Asia’s International Partner in the Digital Era” held at the Ritz-Carlton Pudong.

“Clearly, the BVI remains in pole position in the Asian market,” said Premier and Minister of Finance Dr. the Honourable D. Orlando Smith, OBE, who led the trade mission delegation. “This was the consensus of practitioners presenting at the various conferences. Recent BVI innovations in corporate structures and fintech garnered a great deal of attention.”

Earlier in the day, the Premier and members of the BVI delegation met with the senior management of China UnionPay, China’s largest integrated payment and information services company, to discuss a possible business relationship built around fintech and digital payment services. The meeting was followed by a lunch for the BVI Asia Trade Mission hosted by China UnionPay at their Shanghai headquarters.

During the past two weeks members of the delegation held productive meetings with government officials and business leaders, and hosted BVI Asia Conferences in Hong Kong, Singapore, Beijing and Hangzhou. Premier Smith delivered eleven speeches in five cities during this period.

Commenting, BVI Finance Interim Executive Director Lorna Smith, OBE, said: “Interest in BVI as Asia’s international business partner is stronger than ever. In each city this was obvious both in terms of attendance and audience participation in our mini conferences. Meetings with government ministries and associations were equally positive and through the BVI Government, BVI Finance will remain firmly engaged with China. I am especially grateful to the industry - both from BVI and China - for giving of their time and expertise during these two weeks.”

Participants in the trade mission offered their views on its conclusion.

“As an elected official, leaving the country for two weeks represents a tax on your time, since you want to focus on helping the recovery efforts at home,” said Minister of Housing and Social Development, Honourable Ronnie W. Skelton. “But this is also part of the recovery, meeting people in China, which accounts for more than forty per cent of the BVI’s financial services business. It’s important to show them that we are still open for business. What we’ve seen is a lot of interest in the BVI, particularly from a lot of young professionals. Finally, I have been impressed by the Chinese cities we have seen. I was last in China in 2006.  There has been a lot of development since then, and there is a lot of money here.”

“China is the BVI’s biggest market, and we have to meet potential clients here,” said BVI Finance Head of Business Development and Marketing, Kenneth Morgan. “This trade mission has demonstrated again that there is tremendous potential for the BVI in Asia so we must to continue to build on what we have done. We’ve managed to see quite a few people on this trip, so this trade mission has been very successful.”

“The roadshow has been extremely successful,” said Chairman of BOA Financial Group in Hong Kong and the Bank of Asia in the BVI, Carson Wen. “Through our conferences on this trip we have met between 500 and 600 people, from corporate services lawyers to professionals in trust services, among others. We are reaching a wide market, letting them know what the BVI offers, how BVI regulators are meeting the needs of the market, and what Bank of Asia offers.”

“The BVI Asia Trade Mission is an opportunity to learn about our most important market,” said Harneys Partner, Greg Boyd. “I have been impressed by our reception in China, and how strong the historic ties are. People have been opening doors for us. The ball’s in the BVI’s court now, and we need to get more granular about how we can make a difference for our clients in China and Asia.”

BVI House Asia Director Elise Donovan, said: “It has been a pleasure hosting the BVI Asia Trade Mission over these past two weeks. China and the rest of Asia represent some forty per cent of BVI’s financial services business, and it’s important for the Premier to be here to build confidence in the market. We are committed to following up on the contacts and leads we have made during this road show to ensure that we take BVI’s business to the next level in Asia.”

At each BVI Asia Conference, which has attracted on average more than 100 attendees, delegates covered topics such as the BVI Advantage, the opening of Bank of Asia in the BVI, new BVI products such as the Micro Business Company Act, the new Limited Partnership Act, and how the BVI can become more involved with the Belt and Road Initiative, a multibillion dollar project introduced by the Chinese government.

BVI Finance is the voice of the British Virgin Islands’ financial services industry; marketing and promoting its products and services, as well as managing and maintaining its excellent reputation as a premier international business and finance centre. BVI Finance was incorporated as a company limited by Guarantee in December 2016 and since then has operated as a public private partnership. BVI Finance maintains a strong relationship with key stakeholders including Government and its many partners locally and internationally, media outlets and investors in emerging and traditional markets. To learn more about the British Virgin Islands' financial services, www.bvifinance.vg.

BVI House Asia, based in Hong Kong, was established as the BVI Government’s Representative Office in Asia to support and expand the strong relationship that the BVI has had with the Asia Pacific region for more than 25 years. BVI House Asia allows the BVI Government to be responsive in real time, providing information about BVI business, and working with industry practitioners to increase knowledge and awareness of business opportunities, especially in the financial services industry. For more information about BVI House Asia, please visit www.bvihouseasia.com.hk.