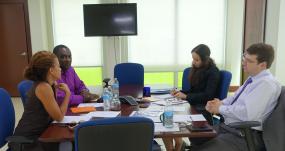 This week, BVI Finance takes further steps to enhance and protect the British Virgin Islands’ reputation as a legitimate and respected offshore financial centre by commencing an economic research study.

A three member team from the London based economics firm Capital Economics is visiting the British Virgin Islands to conduct a pilot study to gather evidence for further research on the contribution of BVI’s financial services to the global economy.

The team arrived in BVI on 26 June and is meeting with various persons from government and the private sector to conduct preliminary research and gain a better understanding of the Territory’s offshore financial services industry. This includes in-depth, informative interviews with government officials including His Excellency the Governor, John S. Duncan, OBE; Premier and Minister of Finance, Dr. the Honourable D. Orlando Smith OBE; Financial Secretary, Mr. Neil Smith; Permanent Secretary in the Premier’s Office, Mr. Brodrick Penn, and numerous stakeholders from the private sector.

The team provided an overview of the objectives of the assignment and laid out how they plan to proceed at a reception held in the BVI Finance conference room on 27 June. During the reception, the Premier stressed the study’s importance to BVI and expressed his gratitude to the private sector for agreeing to co-fund it.

He said, “This study is a worthwhile co-investment between the Government and the private sector and is part of our ongoing commitment to ensure a sustainable and successful future for BVI as an offshore finance centre. My Government is committed to upholding BVI as a legitimate and credible place for facilitating international business.”

Following the Premier’s remarks, Capital Economics’ team leader, Mark Pragnell gave a short presentation in which he provided a complete overview of the project and spoke about what the study means to BVI, Brexit and its potential effects and the results of the Jersey study conducted by his team entitled “Jersey’s value to Britain”.

He said, “In the case of [the report geared towards] BVI, not only do we hope to articulate why international finance centres play an increasingly important role in our increasingly globalised economy and explain the functions of each of the BVI’s finance sectors in the global economy, we also want to demonstrate that this is a real economy with real jobs which supports other real jobs elsewhere in the world through trade.”

Pragnelll added, “This study will quantify the benefit to the global economy of the liquidity, investment and capital efficiency provided by the BVI, not to mention show the full impact of the BVI on other nations’ tax receipts.

The research study, which has been described by Interim Executive Director of BVI Finance Mrs. Lorna Smith, OBE as ‘a joint collaboration between the public and private sector’, is being spearheaded by BVI Finance and will examine the economic, financial and legislative connections between the BVI’s financial services sector and the international community.

It is designed to be an authoritative, evidence-based piece of work demonstrating how BVI business structures have facilitated global commerce by connecting markets and facilitating global investment, trade and capital flow with a specific focus on the BVI’s impact on the growth of the China economy.

Pending favourable results from the pilot study, additional research will be undertaken by the Capital Economics team and a report will be presented to BVI Finance by the end of the year.

BVI Finance is responsible for marketing and promoting BVI’s financial services industry. More information can be found at www.bvifinance.vg, by contacting info@bvifinance.vg or by following BVI Finance on Facebook, Twitter and LinkedIn.