BVI To Get Assistance To Develop A National Ocean Policy 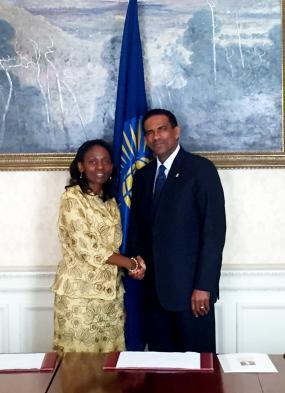 The Government of the British Virgin Islands will be receiving technical assistance for the development of a National Ocean Policy.

Deputy Premier and Minister for Natural Resources and Labour, Dr. the Honourable Kedrick Pickering and Commonwealth Deputy Secretary General for Political Affairs, Dr. Josephine Ojiambo along with other officials held discussions on the matter during a high-level meeting at Marlborough House on May 27.

The Deputy Premier welcomed the readiness of the Commonwealth Secretariat to support the Virgin Islands, which would expedite the government’s efforts to formulate a comprehensive National Ocean Policy to govern the Territory’s marine space.

Honourable Pickering added that he was grateful to Deputy Secretary General Ojiambo and the Oceans & Natural Resources team for meeting and presenting their valuable work in the field.

“I welcome the Commonwealth Secretariat’s interest in supporting the BVI’s efforts to develop a policy framework for the governance of our marine space, to ensure sustainability and maximum benefit to the Territory. The BVI has always had a warm and productive relationship with the Commonwealth and is proud to be a part of the Commonwealth family,” the Minister said.