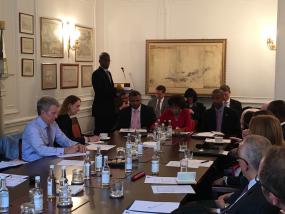 Representatives from the Government of the Virgin Islands met a delegation from the United Kingdom (UK)’s financial services private sector last week.

The meeting was chaired by Executive Director of BVI Finance, Mrs. Lorna Smith, OBE, and is part of an on-going engagement with industry stakeholders. A range of issues were covered including an update on the latest policy developments from the UK, European Union and the Organisation for Economic Co-operation and Development (OECD), as well as a report on the progress made in the jurisdiction’s BVI Forward campaign.

The session also included a presentation from Head of Commissioned Projects at Capital Economics, Mr. Mark Pragnall, who gave a detailed overview of the research study the business has undertaken to examine and illuminate the contribution of the British Virgin Islands’ financial services industry to the global economy.

Mrs. Smith in comments on the meeting said: “The British Virgin Islands has always prided itself on the steps taken to engage with the private sector in order to listen to their views and address any concerns they might have.”

She added, “In today’s rapidly changing landscape, this dialogue has never been more important and I’m delighted to have had the opportunity to lead today’s session and to be able to update on the progress the BVI has made on its mission to ensure the jurisdiction remains one of the leading international finance centres.”