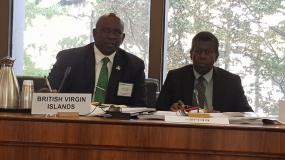 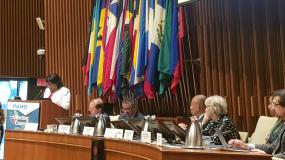 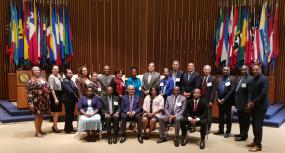 The five-day council meeting that began on September 30 is also the 71st Session of the Regional Committee of World Health Organization (WHO) for the Americas and will conclude on October 4. PAHO’s 57th Directing Council was preceded by the 37th Meeting of the Council for Human and Social Development that took place on September 28 and 29; both taking place in Washington D.C., USA.

PAHO's Directing Council meetings provide a forum for discussion and joint action on health issues of regional concern, providing crucial guidance for PAHO’s technical cooperation with its member countries. Health authorities from North, South and Central America as well as the Caribbean seek agreement on regional strategies and plans that address their common and most pressing health challenges. These include a plan to reduce heart disease by eliminating industrially produced trans-fatty acids in foods; a strategy to make access to organ, tissue and cell transplants more equitable; and a plan to improve the quality of care in health services delivery.

More than a hundred delegates and civil society representatives are participating in the meeting. PAHO Director Carissa F. Etienne, WHO Director-General Tedros Adhanom Ghebreyesus, and Bahamas Minister of Health Duane Sands spoke at the opening along with US Secretary of Health and Human Services Alex M. Azar II and the heads of the Organization of American States (OAS) and the Inter-American Development Bank.

Dr. Etienne launched PAHO’s new 2020-2025 strategic plan which builds on region-wide improvements in public sanitation, housing, nutrition, and health care while addressing persisting inequities in health, particularly for populations living in conditions of vulnerability. The new strategic plan also sets out goals and actions for reducing   non-communicable diseases (NCDs), which are now the leading causes of death and illness throughout the Americas. Taking lessons from past public health emergencies such as the 2009 influenza pandemic and the Zika epidemic, the new plan also seeks to build countries’ preparedness for disease outbreaks and other health emergencies.

Delegates also considered a plan aimed at improving the health of indigenous, Afro-descendant and Roma populations, whose numbers exceed 170 million in the Americas.

The Ministry of Health and Social Development aspires to provide a caring and integrated system of health and social services that facilitates human development and quality of life in the British Virgin Islands.

Caption 1 of 3: Minister for Health and Social Development, Honourable Carvin Malone and Chief Medical Officer Irad Potter representing the British Virgin Islands in Washington D.C. at the 37th Meeting of the Council for Human and Social Development that took place on September 28 and 29.  (Photo provided by MHSD)

Caption 3 of 3: BVI Health Minister Honourable Carvin Malone photographed with other High-level health delegates during at the 37th Meeting of the Council for Human and Social Development that took place on September 28 and 29. (Photo provided by MHSD)

One of the highlights of the meeting is a new PAHO-led initiative to eliminate more than 30 communicable diseases by 2030 through a collective approach involving all the region’s countries.

Health authorities also received a high-level report on health inequalities in the Americas prepared by PAHO's Commission on Health Equity and Inequalities, chaired by Sir Michael Marmot, of the Institute of Health Equity at University College London.

In addition to the meeting’s formal agenda, a series of side events on issues including access to hepatitis C medicines, aging societies, ways to help young people thrive, advances in mental health in primary care, and violence in the region were held. A photo exhibition on practices that improve maternal health will be on display throughout the week.