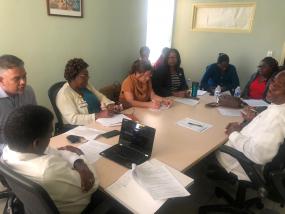 Officials at the Ministry of Health and Social Development have begun collaborating with local, regional and international health agencies as a precautionary measure against the coronavirus.

Chief Medical Officer, Dr. Irad Potter stated that the Ministry of Health has been carefully monitoring the situation since the initial reports from Wuhan, China.

“We will remain on the alert as this new coronavirus belongs to the same family as less severe diseases like the common cold and more severe diseases, like the Middle East Respiratory Syndrome (MERS-CoV) and Severe Acute Respiratory Syndrome (SARS)- the latter which killed over 800 people worldwide in 2003. Information-to-date indicates that transmission is through human-to-human transmission, for example, via respiratory droplets from sneezes and coughs and may also be contracted indirectly, through touching contaminated surfaces,” said Dr. Potter.

As of January 23, there has been an official report of 830 confirmed cases and 26 deaths, with most of the cases originating from or in Wuhan city which has made it primarily a local health emergency for China. The outbreak in Wuhan has been linked to their South China Seafood City, likely indicating an animal-human (zoonotic) transmission, although no animals sampled have tested positive for the virus.

In an effort to limit the spread of the deadly virus, Chinese officials have locked down three (3) cities, including Wuhan, restricting travel out of the country.

The novel coronavirus, 2019-nCoV has now spread to at least six other countries which are Japan (1 case), Thailand (5 cases), Korea (1 case), Macao (2 cases), Taiwan (1 case) and the USA (1 case). Other countries such as the United Kingdom, Australia, Russia and Saudi Arabia are currently testing suspected cases.

Chief Medical Officer, Dr. Potter also said, “Despite international cases, the World Health Organization (WHO) has decided not to declare it a global health emergency as it is still too early in the disease outbreak. This however, does not mean that the British Virgin Islands will not take it seriously, as its infectious and contagious nature indicates that spread is inevitable- the extent of which is undetermined.”

He explained that evidence is still emerging as investigations continue in an attempt to determine whether its severity and lethality is similar to that of SARS. No transmission has been reported in the Caribbean, thus the Virgin Islands’ public is advised to be extra vigilant and take the necessary precautions.

The Ministry of Health and Social Development aspires to provide a caring and integrated system of health and social services that facilitates the recovery of human development and quality of life in the British Virgin Islands.