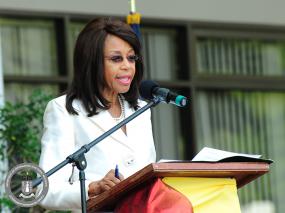 Chairman of BVI Finance Robert Briant has paid tribute to the outgoing head of BVI Finance Mrs. Lorna Smith, OBE following her “immense contribution” to the jurisdiction’s financial services sector over the years.

It was previously announced that Lorna Smith, OBE, would be stepping down from her position as interim executive director as she leaves the role this week following a period of transition with the new head, Elise Donovan.

Mrs. Smith managed the BVI Finance in 2016, during a critical period for the jurisdiction. She led the industry through a number of regulatory and reputational challenges over the last three years, and played an instrumental role in the protection and promotion of the Territory’s international business and financial services sector.

Mrs. Smith led industry efforts to rapidly return the financial services sector to a “business as usual” footing following Hurricanes Irma and Maria in 2017. She worked closely with the private sector and secured funding to support the short-term recovery, as well as agreeing longer term commitments with key member firms to secure the future of the sector.

Mrs Smith  has led a number of initiatives to improve understanding of the BVI’s international business and financial services industry. This activity has included commissioning a number of third-party reports to ensure a stronger evidence base to demonstrate the importance of the jurisdiction at a global level.

Most recently this included a report by the Overseas Development Institute (ODI) on the role of international finance centres with regard to development finance, as well as a study launched by Capital Economics in 2017 on the value of the BVI’s global contribution.

Mr. Briant said: “I would like to take this opportunity to personally thank Lorna Smith for her immense contribution and dedicated service to the British Virgin Islands over the years.

He added, “She has played an integral role in driving the development of the BVI’s financial services industry, both on island and at an international level, and her sector expertise and strong leadership have been key to maintaining our position at the forefront of innovation on the global stage.”

Lorna Smith is succeeded by Elise Donovan who became the Chief Executive Officer (CEO) of BVI Finance effective  February 4. This follows a four-month period in the UK as Director of the BVI London Office. Prior to this, Donovan was Director of BVI House Asia in Hong Kong since January 2014.

BVI Finance is responsible for marketing and promoting the BVI’s financial services industry. More information can be found at www.bvifinance.vg, by contacting info@bvifinance.vg, or by following BVI Finance on Facebook, Twitter and LinkedIn.