Office of the Governor
Topics:
The Public Service
Release Date: 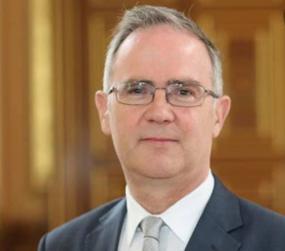 His Excellency the Governor has announced that Mr John Rankin CMG has been appointed as Governor to the British Virgin Islands, in succession to him.

Mr Rankin is expected to arrive in the new year when Governor Jaspert’s appointment is due to conclude. This will allow time for him to settle ahead of the key priorities that the Territory expects to face in 2021. He brings with him more than 30 years of experience in the public service, most recently serving as Governor to Bermuda.

On his appointment as Governor, Mr Rankin said,

“I am very pleased to have been appointed as Governor of the Virgin Islands and I look forward to working in partnership with the Government in the new year. 2020 has not been without its challenges.  But the people of the Virgin Islands have shown great strength and spirit in meeting those challenges and I promise to do all I can to support the building of further resilience against the risk of natural disasters.  I look forward to contributing to life on the Islands and to carrying out my responsibilities under the Constitution in the areas of external affairs, security and good governance in service to the people of the Virgin Islands.”

Governor Jaspert extended his appointment earlier this year in order to provide support and continuity throughout the Territory’s initial COVID-19 response and what was expected to be an above average hurricane season. By the time of his departure at the end of the year, he will have served almost three and a half years as Governor.

His Excellency the Governor underlined his ongoing commitment to supporting the people of BVI and ensuring a smooth transition with his successor in the months ahead. He said, “I am very grateful for the opportunity to have met and worked with so many inspiring individuals and to have served the people of BVI over the past years. I know the new Governor and the UK will continue to stand by the people of BVI and work earnestly to achieve the very best for the Territory.”